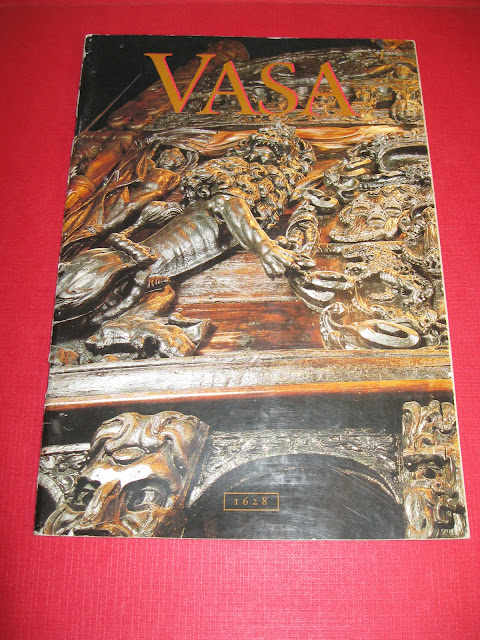 As the 30-year war between protestants and Catholics raged in Germany, Swedish King Gustav II Adolf, decided to get Sweden involved in assisting the protestant cause and adding to Swedish possessions abroad. With this in mind, he mobilized his army and built up his fleet of warships. One of these ships, the Vasa, was to be a Royal Ship, a designation for the largest type of naval vessel of the 17th century. 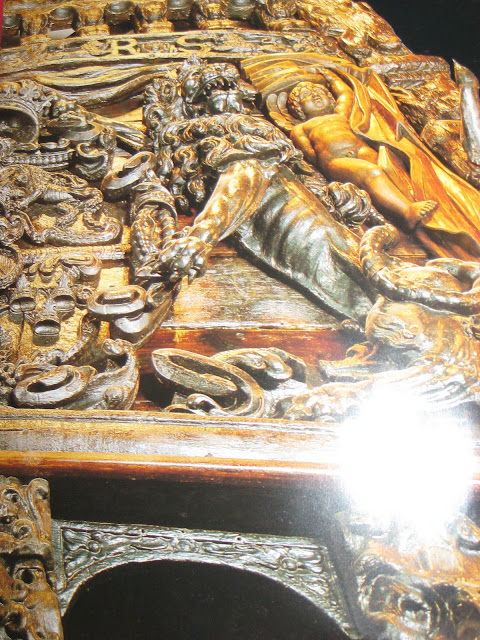 Quotes from the Vasa Museum's brochure:
"Stockholm, summer 1628. For three years, carpenters, pit-sawyers, smiths, ropemakers, glazier, sailmakers, painters, boxmakers, woodcarvers, and other specialists had worked on building the Navy's new warship - the Vasa. The Vasa was designed to be the foremost of Sweden's warships, with a hull constructed from one thousand oaks, 64 large guns, masts more than 50 meters high, and many hundred gilded and painted sculptures. 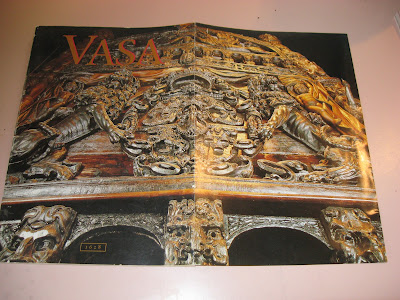 In 1628, the Vasa was moored immediately below the Royal Castle. There, ballast was loaded, as well as the ammunition and guns required for her maiden voyage.
By Sunday, August 10, everything was ready for the maiden voyage. The weather was fine and the wind light. On board were around a hundred crew members, but also women and children. This was to be a great ceremonial occasion, with pomp and circumstance, so the crew had been given permission to take their families on the first voyage out through the archipelago." 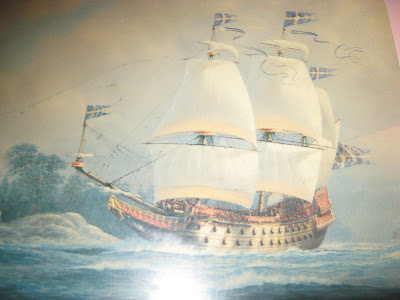 This was the Vasa as she was supposed to look, a proud warship, sailing the seas and helping to win the war. But that was not to be. 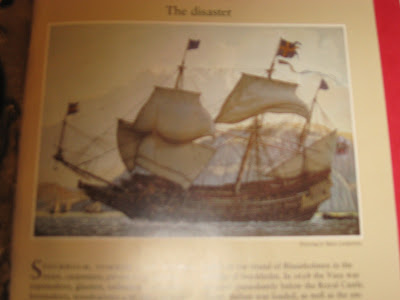 Quote: "The sailors climbed the rig and set four of the Vasa's ten sails. The guns fired a salute and slowly, serenely, the Vasa set off on her first voyage."
An eyewitness account: "When the ship left the shelter of Tegelviken, a stronger wind entered the sails and she immediately began to heel over hard to the lee side; she righted herself slightly again until she approached Beckholmen, where she heeled right over and water gushed in through the gun ports until she slowly went to the bottom under sail, pennants and all." And there she stayed for over 300 years. The Vasa had only traveled 1,300 meters or about 1,422 yards. 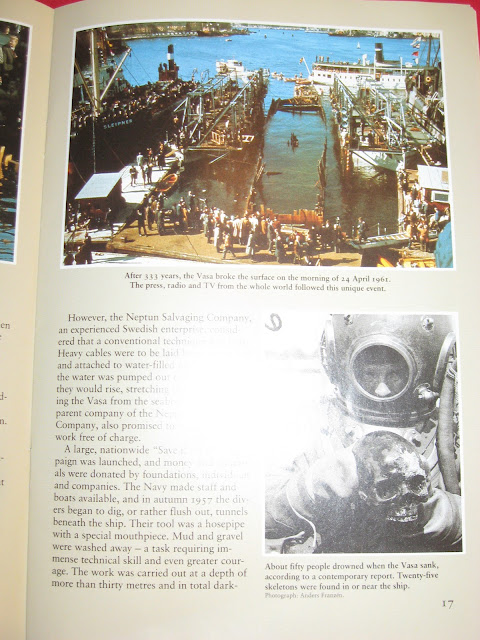 Then in the 1950s, an engineer by the name of Anders Franzen, an expert on naval warfare in 16th and 17th centuries and a specialist on wrecked naval vessels, began to look for the Vasa. After searching for several years, he succeeded on August 26, 1956. After he persuaded the authorities to lift the ship to the surface, no one knew how to accomplish this. Such a large ship had never been salvaged before. 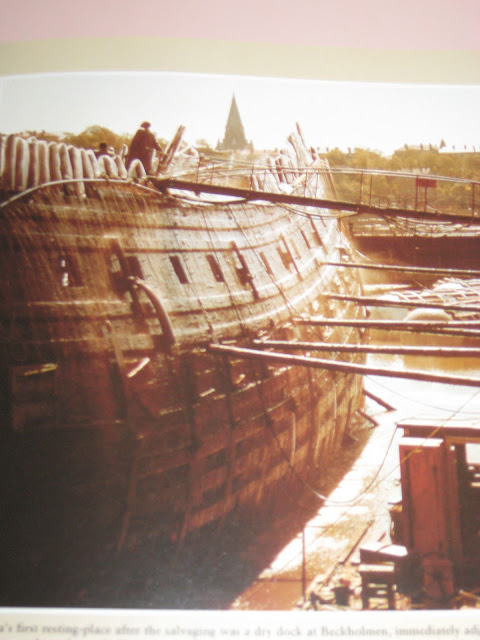 It would take up too much time and space to go into how it was done, suffice it to say that it was accomplished and she was lifted to the surface on April 24, 1961. The Vasa was so well preserved that, after being salvaged and drained of water, she was able to float unaided.
Since waterlogged wood starts to split and shrink in warm, dry, air, preservation was the first priority. This work continued for 17 years in a temporary museum building, where the ship was sprayed at intervals day and night with a special solution. I saw the Vasa there for the first time and remember the humidity of her temporary home. To this day, in her permanent museum, the Vasa requires exact and special care. The Vasa will be preserved for ever. 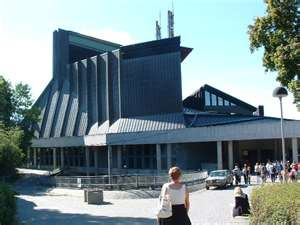 The Vasa Museum today. I really enjoyed my visit to this museum and was impressed by what had been accomplished in salvaging and preserving this ship with all her treasures and stories to tell. 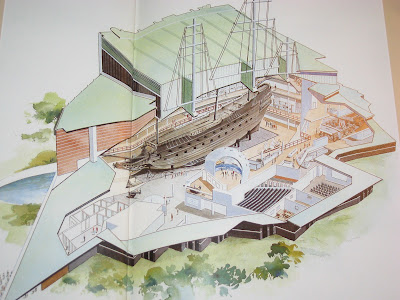 Since I grew up on the Baltic Sea and also sailed here with my husband, I love all things associated with ships. And I'm very interested in how people lived and worked in different eras. The many museum displays more than satisfied my interest in how a 17th century Swedish sailor lived.
Here are a few of the many, many things that were salvaged: 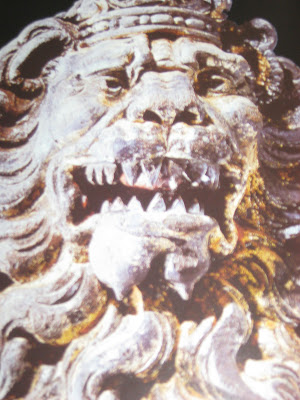 King Gustav II Adolf was known as the "Lion of the North" and many statues of lions were found on board. 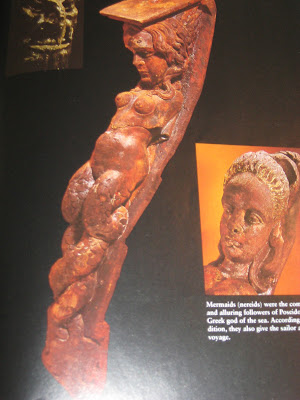 Mermaids, according to tradition, are supposed to keep sailors safe and voyages successful. Sadly, that was not the case with the Vasa. About 50 persons went down with the ship and 25 skeletons were found near her. 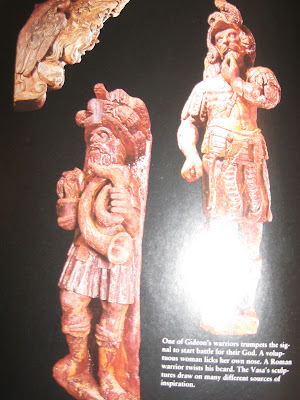 The sculptures found on the Vasa draw on many sources of inspiration. 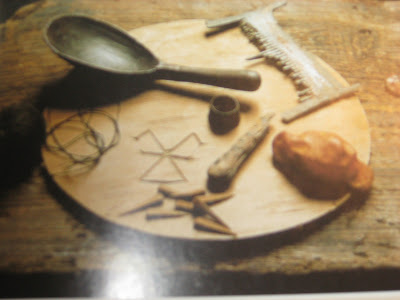 A small box contained a comb, a thimble, sewing thread and wax. 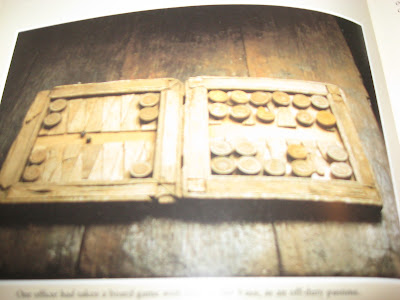 An officer took a board game with him on the Vasa, as an off-duty pastime.
The photos and quotes above are from my brochure from The Vasa Museum, Stockholm, Sweden
http://www.vasamuseet.se
Should anyone want to learn more about the salvage and preservation of this magnificent ship,  you can also check here:
http://en.wikipedia.org/wiki/Vasa_(ship)
Posted by Inger at 7:05 AM