First let me welcome Dreaming, a new follower to my blog.  Then I want to introduce you to this remarkable book: 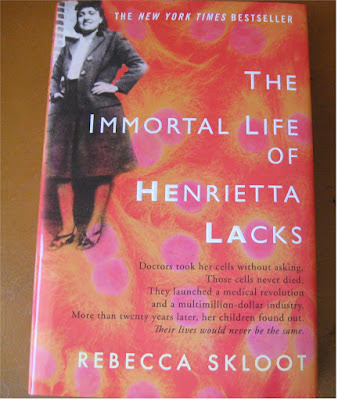 The Immortal Life of Henrietta Lacks
By Rebecca Skloot


A quote from the cover of this book:

"Doctors took her cells without asking.
Those cells never died.
They launched a medical revolution and a multimillion-dollar industry.
More than twenty years later, her children found out.
Their lives would never be the same."

Henrietta Lacks died from cervical cancer in 1951. Before she died, her surgeon took samples of her tumor cells and put them in a Petri dish. Henrietta's cells started to grow and they have never stopped. According to the book, you can find HeLa cells, as they are called, in almost any lab in the world. Probably in the billions by now, the cells now weigh as much as 100 Empire State Buildings. Henrietta's cells have been part of cancer research; they have helped develop treatments for herpes, leukemia, influenza, hemophilia and Parkinson's disease; they were used to develop the polio vaccine, to study viruses and the effects of the atom bomb; they played a part in important advances in medicine like in vitro fertilization, gene mapping and cloning, and have been used for many, many other purposes.

Rebecca Skloot, the author of this remarkable book, learned about Henrietta Lacks and her immortal cells when she was only sixteen and took a college-level biology class. She learned that Henrietta's cells were the first immortal human cells to be grown in a laboratory. Scientists had tried to grow human cells for decades, but they would all eventually die. Henrietta's cells never died, they continue to grow to this day and have now lived many, many more years outside her body than they did inside. Rebecca's professor told the class that the HeLa cells were one of the most important things to have happened in medicine in the last 100 years.

Rebecca Skloot was hooked. She went home and tried to find out all she could about the HeLa cells and Henrietta Lacks. After she later decided to write this book, it took her more than ten years of research. I imagine she learned about the science involved, about the racial politics of medicine, informed consent, medical ethics, human rights in medical research, and more. All those issues are addressed in the book. But most of all she had to find Henrietta's family and gain their trust.

Henrietta Lacks was an African-American woman from Clover, Virginia, who moved to Baltimore, where her husband worked, in the 1940s. She was only 31 years old when she died in 1951. Henrietta and her husband had five children who knew nothing about her immortal cells for 20 years. Once they found out, there was much confusion on their part. It was difficult to understand what immortal cells meant, or how come so much money was made from their mother's cells when they, themselves, could not afford health insurance. Much of the book is about Henrietta's now adult children, particularly her daughter, Deborah, with whom the author developed a close relationship. Deborah is quite a character; she is angry, feisty, sad, tough and funny. As a matter of fact, Henrietta herself and the rest of her family are all unforgettable characters.

The book is fascinating on so many levels and a very important work of non-fiction. I never took biology in college, but still, with these cells being one of the most important things to happen in medicine, why have I never heard of them? I read a lot, but I never read about Henrietta and her immortal cells and all they have done for me, for you, and for everyone. Yes, I believe that all of us have in one way or another benefitted from the HeLa cells. After reading this book, I wanted everyone to know the importance of these cells. I wanted everyone to meet Henrietta and her family. I wanted everyone to know what her children thought and felt about all this. I even wanted the book to be mandatory reading at some educational level or other in schools everywhere.

This is another FIRST BOOK by an author and all I can say is: What a book! Rebecca Skloot, I cannot imagine what you must have gone through to write it, but I'm grateful you finished it. You wrote a remarkable book!

Rebecca Skloot has established a scholarship fund for the descendants of Henrietta Lacks. Donations can be made at http://www.henriettalacksfoundation.org/  After reading this book, I know the author is a very special young woman and I am not surprised she wanted to do something good for this family.

And, once again, many thanks to my friend Jane – the now happy owner of a Kindle. (No more books to pass along is what that means, but while I have been sick, somehow a whole bunch of books from Jane have mysteriously appeared in my mail box!) And she knew how much I wanted to read this book and bought it for me for my birthday! Thank you, Jane, you take such good care of my intellectual pursuits, as well as my need for a mystery fix every now and then.
Posted by Inger at 7:44 AM