Before we talk about books, I want to welcome two new followers to my blog: Welcome Ally and Chambray Blue.  I'm looking forward to getting to know you both. -- Inger 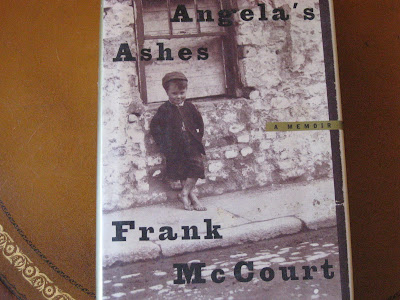 I bought this book at a thrift shop before I moved from LA. Once here, it ended up, unread, in my bookcase. The reason, I believe, was that I thought it may be yet another difficult read. I knew of course what a huge success it was and I'm sure I intended to read it at some point in time. Looking back over the past couple of months, reading all these great books I had in my bookcase has been a definite bonus resulting from the need to rest and heal. And this book was fabulous. I'm now in awe of Mr. McCourt, his family, and everyone else who lived through such tragedies and hardships without an ounce of self-pity. I'm in awe of all the characters in the book who meet adversity with so much humor and of Mr. McCourt who describes it so hilariously. He was a wonderful story teller in the great tradition of his native Ireland. And I'm so happy to have finally read this book and to actually own it. A bargain, indeed, at the dollar or so I paid for it. 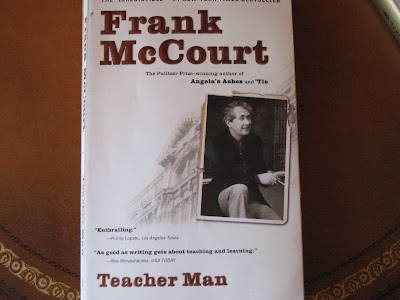 After Jane heard how much I liked Angela's Ashes, she gave me Teacher Man, the last book in Frank McCourt's autobiographical trilogy. And Teacher Man is another gem. And how could it not be, written, as it is, by Frank McCourt. This book tells the story of the 30 years he spent teaching high school in the NYC public school system. Probably one of the more difficult jobs to take on. At first he has no idea what he's doing, so he starts telling stories. Wonderful stories from his childhood in Ireland. I can just see these tough and unruly New York teenagers not wanting to listen or learn at first, but then, in spite of themselves and their tough exteriors, slowly beginning to do both and to give their teacher the respect he so deserves. Parents, school administrators and others had problems with his teaching methods from time to time, but he persevered and mushed on (as I like to say – it's not a word, I don't think – mush is what they call out to the sled dogs of the north – and I use it to describe being tough and stick with it). Over the years, day in and day out, he had to work hard to get the attention and gain the respect of all these teenagers. And he did and he made me fall in love with him and his humanity as I read the book. Like Angela's Ashes, this book is honest, poignant and absolutely hilarious. I'm happy he decided to capture all those great stories on paper and that the larger public came to love his books. His success was such a great story, as it came later in his life. And it was so well-deserved. What a guy! He will be missed.
Posted by Inger at 8:37 AM