Could it be that fall has finally come to the canyon? 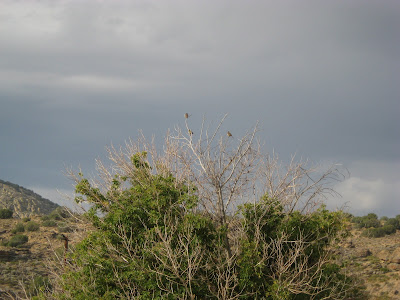 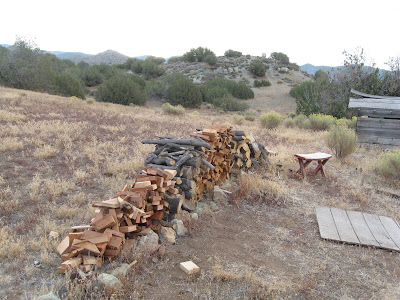 the wood pile. From where I couldn't carry anything heavy, but my husband left logs by the house, so I can bring them in when I feel like making a fire. This morning, I only wanted to pick up some kindling and be outside for a while. It was cool and crisp and felt like fall has finally arrived. 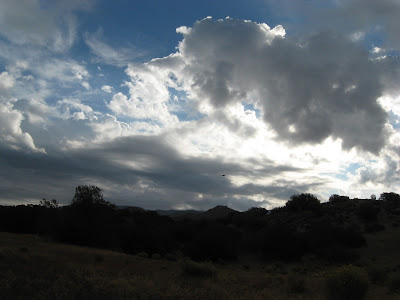 But first I sat on my little bench for a while, watching the ravens fly by and reflecting on how wonderful it is to be surrounded by so much serenity. This raven flew by so fast, he is nothing but a speck against the clouds in this picture. Can you see him? 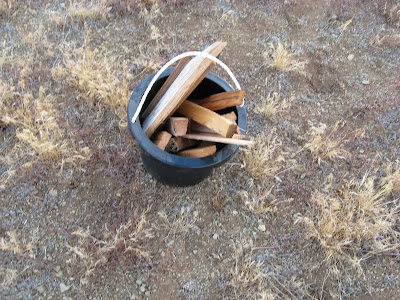 We have a lot of construction wood and I like to burn the thin flat pieces for starter wood. So I filled my little bucket several times and carried the kindling back to the house. Rachael put my wheelbarrow in the shed for me because there is no way I can handle it right now. But walking up the little hill to the wood pile and carrying the kindling back several times at least gave me some badly needed exercise. 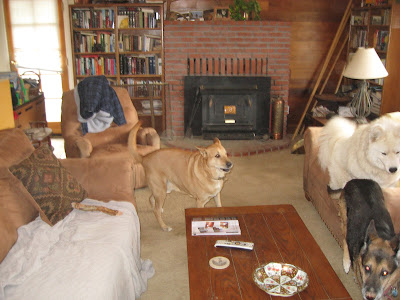 Inside the house, the dogs decided to get some exercise of their own. Once again, 12-year old Angel initiated a fun game of -- Look at me!! I stole Samson's piece of wood! -- She ran around the coffee table with his stick in her mouth. Here she just dropped it on the couch, without Samson noticing, so he's still chasing her, while Soldier's looking on, barking like crazy. 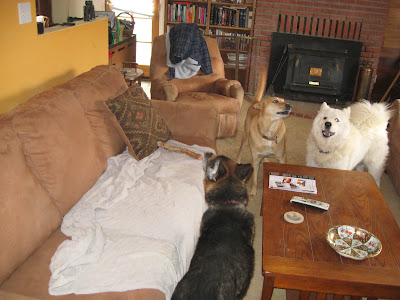 I guess we have a stand off here. Soldier says to Samson: "Well, are you going to go for the stick or not? Chicken!" Samson didn't dare to go past Angel and get his stick, so I picked it up and put it away for a while. She is something else my Angel. No wonder I have fallen so in love with the German shepherd breed.


We all had a fun morning and we all hope you have a nice Monday.
Posted by Inger at 12:50 PM