Thank you all for your comments. Since I'm alone so much, interacting with you is something I'm looking forward to every day. I just love to read both your posts and your comments to mine. I didn't reply to the last comments because after I came back from my road trip, I was totally exhausted. I went to bed real early, but I was still so darned tired yesterday, I just rested all day, feeling pretty useless. I feel better now and I've accomplished a few things today. 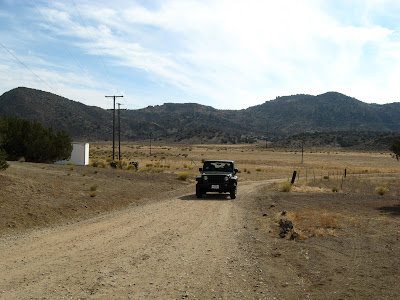 So on Thursday, I took off down the mountain in the Jeep. I was a little worried about this new experience, but the windstorm had subsided and the weather was gorgeous, so off I went. I played the Eagles Greatest Hits over and over and it didn't take long before I started to feel like I was much, much younger and much, much happier than I had been in a long time. I can't sing AT ALL, but I love to sing along when alone in a car and what's better for a road trip in the desert mountains than the Eagles?

As for the Jeep, I think it's best to be both tall and young, or at least in good shape, if you're going to drive one. It fit me and my long legs perfectly. It's easy to drive, but I wouldn't go too fast in it, and of course easy to park. I just loved it! What's not to love about a vehicle that makes you feel young and happy?


It was much warmer in Bakersfield and very pretty early fall weather. While waiting my turn in my endocrinologist's office, I got involved in another woman's trauma. I had just had a trauma of my own, seeing a poor lost young dog trying to cross a busy street and being completely unable to help it. I hate those things; I never used to be as upset about seeing lost dogs in trouble as I am now.

So I arrived at the doctor's office in tears more or less. But then there was this woman. She said she had had Type 1 diabetes for 43 years, since she was one, so she must have been no more than 44, but looked much older. She had forgotten her glucose meter and the doctor would not see her without the meter. Like me, she had an insulin pump and the doctor can't make the proper adjustment without seeing the test results from the meter.

So this woman was crying and crying but her friend went back to her place to get the meter. I was sitting right there, so I got her some tissues and tried to calm her down. She had to walk with a walker, she was overweight, she smoked (terrible under any circumstances, but even more deadly if you have diabetes), and she told me her blood sugars were super high because she was getting epidural injections for her back problems (steroids tend to make your sugars go very high). I was listening with sympathy, I guess, because before long she began to tell me ALL her problems: her son, who was unemployed and uninsured, had been tentatively diagnosed bipolar, but no one would give him any medication for his disorder; and her son's girlfriend was expecting their baby any day. Then she said she was also bipolar, but on medication; and she suffered from a personality disorder, and something else that she mentioned, but I didn't ask her to clarify.

And she had no idea how to adjust her pump settings herself – not even a temporary adjustment, until she could see the doctor. I asked her if she had a user's manual – she said her son had packed it away in the garage. Phew, that was a lot for me to absorb and while I felt bad for her, there is just something about people who cannot or will not help themselves. I have been around life long enough to know that there is little you can do, but listen, as I did. And for a time I forgot about the lost dog.

My visit with the doctor was good. My three-month average blood sugar levels were lower than at my last visit, which was great and unexpected. They have been too high though, so he adjusted my insulin pump settings.

The drive back home, up the mountain, was uneventful and I was soon home again, greeted by happy dogs. 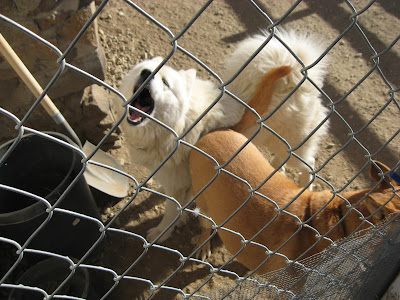 And by my husband, who had cooked good food and baked a carrot cake. It doesn't get better than that. He was thrilled that I liked to drive the Jeep, really happy about it. He's now back in LA again, but it's ok for now, more time for me to catch up with all of you.


I am sort of glad I met that woman because she made me see very clearly that, although I may have had a difficult time lately, what I'm going through is really nothing much at all. So life is good!
Posted by Inger at 5:39 PM