Before I talk about the book, let me welcome Beverly, a new follower of my blog. 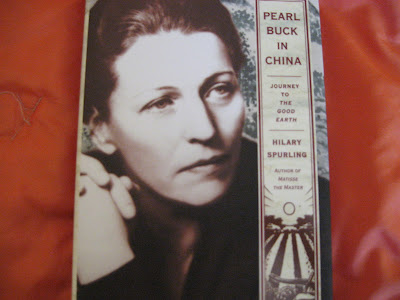 Hilary Spurling writes this in a paragraph in the beginning of the book: Buck is virtually forgotten today. She has no place in feminist mythology and her novels have been effectively eliminated from the American literary map. In the People's Republic of China her fiction remains unique because it accurately depicts the hard lives of an illiterate rural population ignored by the Chinese writers who were Buck's contemporaries and subsequently obliterated from the record by Communist Party doctrine.

The Good Earth is still being published and has been read by millions around the world. But Pearl Buck did win the Nobel Prize in literature, after all, only one of two American women to have done so, and after reading this book I wondered what happened to the rest of her books. I was surprised to learn from this biography that she wrote more than seventy and The Good Earth is the only one I ever heard of or read.

Pearl Buck was born in America in 1892 and grew up in China, the daughter of missionaries. She felt as Chinese as the children she played with and spoke their language before she learned English. Growing up in China, Pearl Buck was the first Western person to both gain an in-depth insight into the lives the Chinese people and to write about her observations. Pearl knew their culture, their lives, their hardships, and perhaps more than anything, their women. Women in China suffered terribly, with domineering mother-in-laws, baby girls considered worthless and in the poorer families often killed at birth, and suicide a very common way out for young wives. Through her books, Pearl Buck became the first person to open this world to people in the West.

This biography is very well written and I found the first two-thirds, where Pearl is living in China, to be absolutely fascinating. Ms. Spurling brings that time and place to life in much the same way Pearl Buck does in The Good Earth.

As China is coming into its own in the world of today, this book becomes even more interesting. It documents not only the life of Pearl Buck, but the history of China at the end of imperial times through the 'Boxer' rebellion, bandits, wars and one natural disaster after another. You meet fascinating people here: Pearl's mother Carie, who once saved her family from an angry, anti-western, mob by throwing a tea party; Wang Amah, the Chinese nurse who raised Pearl and taught her traditional Chinese values, stories, riddles and rhymes. You meet the widow, Madame Wu, the poet Xu Zhimo and many others.

You also meet the two men in Pearl's life in China: Her father, Dr. Sydenstricker, was a missionary whose only other focus seems to have been to publish his translation of the New Testament into Chinese vernacular. Pearl's first husband, Lossing Buck, studied the farming situation in China. From his hands-on help in teaching the rural population how to cope with famines, floods, and other natural disasters, to his published studies, his lectures at the universities, he became the leading figure in helping to improve rural life in China. It impressed me that he went about his business in such a methodical manner in the midst of wars, famines, floods, and in places over-run by bandits. While he was not the right guy for Pearl, he certainly was the right man for China. His accomplishments were huge: Among them he established China's first Department of Agricultural Economics and he produced a massive three volume work, Land Utilization in China.

Pearl Buck had to leave China for good in the 1930s and I didn't find the last part of the book as interesting. Pearl and Lossing were divorced and she married her publisher, Richard Walsh. With the money she made, she was able to get the best care for her developmentally challenged daughter. Pearl also adopted several other children with Walsh.

If you are interested in China or in Pearl Buck, I think you will like this book.
Posted by Inger at 10:13 AM