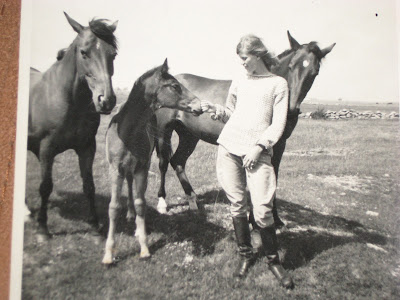 This, my favorite photo of me, is from the summer of 1962. In those days, I rode horses all the time and for some reason I entered a contest that had to do with knowledge of horses. It was a nationwide contest and I was one of the winners. The prize was a one-week stay at horseback riding camp in Falsterbo, a seaside community in the south of Sweden. While there I had a lot of fun, got to ride retired racehorses for the first time (like sitting on a cloud), met some nice kids, which resulted in a visit to a riding competition of some sort on the island of Oland. That's where this picture was taken.


You may wonder what that has to do with anything, other than it is always fun to look at pretty horses. Well, today's treasure is the very same sweater I'm wearing in that picture. Just the other day, I took it out to wear for the winter. 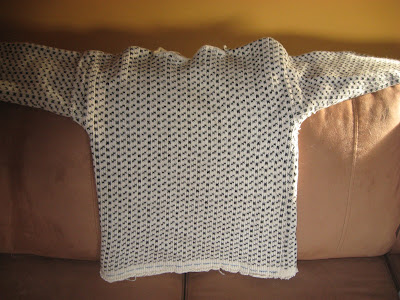 Here it is, still going strong. I actually got this sweater when I was around 15 years old, which makes it very ancient for a sweater. And it is also special to me as it was very much a part of my teenage years in Sweden.

When I was young, there were two fractions among teenagers in Stockholm. One was the more intellectual, better educated kids and we, yes I was among them, loved Dixieland jazz, which had a huge revival at that time, just before the arrival of rock & roll. We went to school dances and frequented a wonderful jazz club in a cellar in Old Town, the medieval part of Stockholm. No liquor was sold there, but you still needed to be a certain age to get in, so fake IDs abounded.

We dressed in these kinds of sweaters, called Icelandic fishermen's sweaters although they were actually made in Norway. We wore skintight corduroy trousers, shoes with thick soles, and above and beyond, you had to have a duffel coat. If you saw the film, The Third Man, you know the coat I'm talking about. The camel-colored hooded coat with big wooden buttons, that I believe the British also wore during the Second World War. 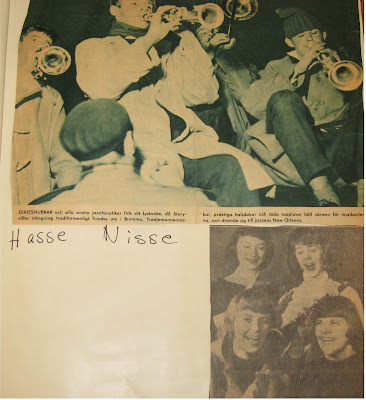 The guys in this picture are wearing their duffels. And that's a very young me in the lower left of the smaller photo, wearing my duffel coat as well.


The other fraction was the bikers. They dressed in jeans and leather and were our mortal enemies. I don't know what kind of music they liked, probably Elvis, once he became popular, but I'm not sure. I imagine early rock though.

One winter, the bikers and the Dixieland guys met to duke it out in an ice hockey game. It was a huge event among teens and it was covered by all the local newspapers. And we won 3–0, it says in this article: 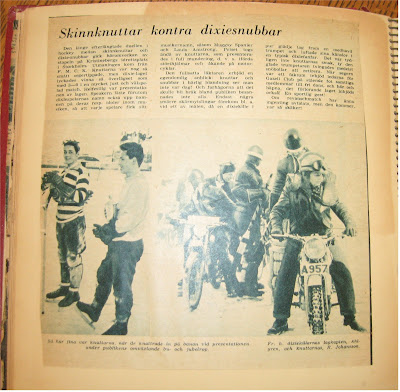 All in all, it was a wonderful time to be young. I always had a crush on someone or other in one of the bands. Usually the clarinet player. I don't know why, but they always seemed to make my teenage heart beat faster. It was all very innocent in those days, and as my ancient sweater keeps me warm up here, it also reminds me of that place and time in my life and all that happy music.
Posted by Inger at 9:39 AM