Today's treasure is a small vase in cobalt with gold leaf design. Made by Lindner Kueps Bavaria, it is very delicate and, as with all the treasures I have kept, it reminds me of people I have known and places I have visited. 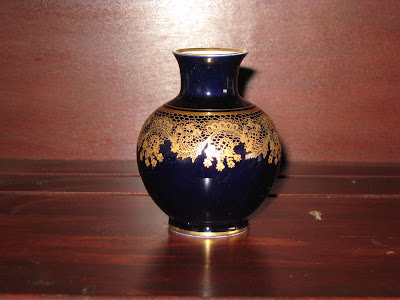 This is the story of the vase:

It was 1952, and my father thought it would be a good idea if I could spend some time in Germany before I began studying the language in the fall. Herr Wille, a business associate and friend of my dad's, and his wife, invited me to spend an entire month with them, first in Solingen and then on the island of Langeoog.

So soon after my 12th birthday, off I went on my very first airplane trip. All went well, and I landed in Wuppertal and met up with the family. There were a couple of daughters, I think I was in-between them in age, and two younger boys. They lived in a huge home by a Buche Wald, (a beech tree forest). I will never forget how magical that forest was. Everything in it was light green, tall trees with smooth trunks that I remember as green, but it may have been the light. The sunlight, filtered by the leaves of the tall trees, was such that it was easy to imagine elves and other forest critters living there. It was by far the prettiest forest I have ever seen.

The family took me on many trips to nearby places of interest and nearby countries, even. They had a huge Mercedes with a classic profile that probably would be worth a fortune today. The photos of me and their daughter are from a trip down the Rhine river. And the one of Herr and Frau Wille is from the island. He is pretty dressed up for the beach, don't you think? I seem to remember he only visited us there a few times, so he was not on vacation with us. 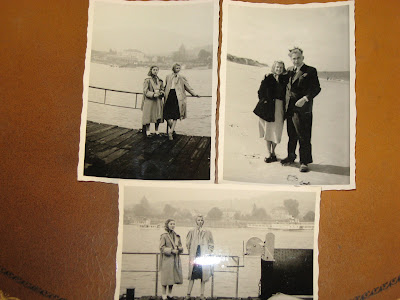 You can see how tall I was at twelve. I'm so glad I stopped growing soon after that! I remember all the bombed out places, particularly the cathedral at Köln that was being repaired at the time. This was in 1952, so not that long after the end of the second world war. Another memory is seeing the film Heidi; I don't know why I remember it so clearly. It was in German, of course, and I didn't understand much. I also remember having my first crush on a tall, dark and handsome drummer who played at the beach restaurant, where we would eat lunch every day. Of course, I never met this guy, but still, you never forget your first crush.

On the way back home to Stockholm, I had to change planes in Copenhagen. I was a bit worried, to say the least. I remember somehow meeting a Swede, maybe the airline people found him for me, who helped me negotiate the airport. I clearly remember sitting at an airport restaurant with him. And he made sure I got on the right plane back to Stockholm.

It's funny how my Tuesday posts are taking me down memory lane. Some of these things I haven't thought of for many, many years and it's really fun for me to think back and remember.

Thanks for coming along on yet another trip back in time.
Posted by Inger at 8:05 AM