Welcome Kay, a new follower of my blog. 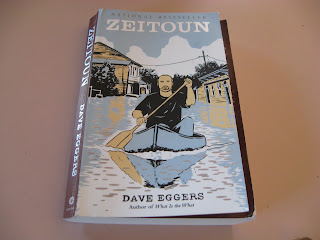 
My friend Jane sent me four books back in January: Zeitoun, Brother I'm Dying, A Guide to the Birds of , and Plain Song. I haven't read Plain Song yet, but I think I read the first three books in a little more than a week. They were all that good. It was interesting for me, as an immigrant myself, to find that in all three books, the main characters were also immigrants. Zeitoun, a painting contractor, was originally from ; the brothers in the next book were from ; and the bird watchers in the third book were from . I should say they were some generations removed from their immigrant forefathers, who came to , where this book takes place, to work on the railroads.
Zeitoun, as so many others in , had ridden out many hurricanes before Katrina and was, therefore, not all that concerned. After his wife and children left town, he decided to stay. My husband is from and we have many relatives there and many of his childhood friends still live there. I remember my husband calling a friend of his, who refused to leave, the night before the storm hit. I remember that although most of the older relatives left town, one of his uncles refused to leave. He and his wife ended up spending many long days with little to eat and drink in the phone company building where their daughter worked. Zeitoun's brother kept calling him from , of all places, begging him to leave as well.
This book tells the story of Zeitoun, a Muslim immigrant to the , who met an American Muslim woman, named Kathy, got married, had kids, and established a successful contracting business in . As Muslims, they had run into some problems, but they were basically accepted and well liked by their customers and their community. A part of the book talks about Zeitoun's early life with his parents and siblings in a small fishing town on the coast of . Then it moves on to Katrina and the aftermath of the storm.
Zeitoun owned a canoe and the book tells the story of how, as he traveled all across New Orleans in his canoe, he rescued a woman trapped in a house, he helped others, he checked on his properties, he fed some trapped dogs, and even though he didn't follow the mandatory evacuation orders, he did no harm.
Toward the end of the book, he and two other men are arrested, probably by the National Guard, armed with M-16s and pistols, at one of Zeitoun's properties. They are detained and put in a temporary jail, erected at New Orleans Union Passenger Terminal, where normally Greyhound buses and Amtrak trains park. There they are separated and Zeitoun and his fellow Syrian are put in a small cage. They are threatened by the guards; they are called terrorists, Taliban, al Qaeda, and so on. It seems like they are being fed nothing but pork, which of course they can't eat, and there is nothing to sleep on but the concrete of the bus parking lot. Reading this part was horrific and unbelievable. One really does not want to believe that things like that can happen here in one's adopted country. This temporary jail was set up so that convicted prisoners, from a prison nearby, could be evacuated. That made sense, better than drowning in the storm, but why Zeitoun ended up there, does not make any sense whatsoever. He was eventually released but I'm sure life did not go back to normal for him and his family.
And the dogs he had been feeding, died, all of them. And I cried. It was that kind of a book.
Posted by Inger at 11:15 AM