L. A. Street Scenes with Commentary

We went to Los Angeles on Thursday for business reasons that required a lot of driving around town. I couldn't stand the traffic and was glad I brought the camera to distract me a bit. Here are a few street scenes, not the best and straight out of the camera, but I still hope you may enjoy them. At least they are a change from my usual country scenery. 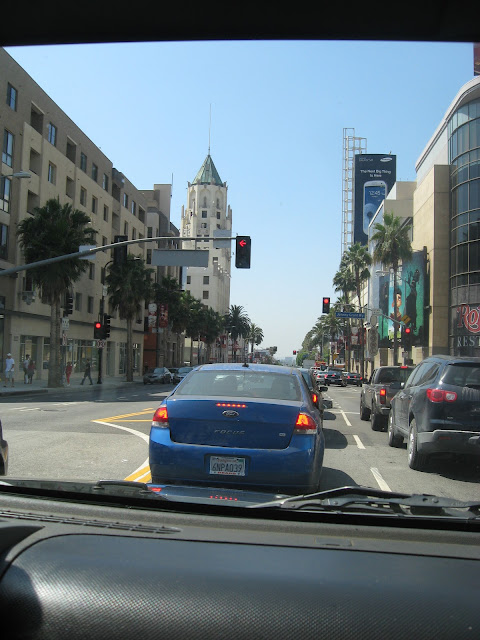 Waiting at a traffic light in Hollywood. I was grateful any time we had to stop; riding around town made me a nervous wreck. Hubby was not too pleased. And to think, I used to be so happy living in LA because driving was so easy there compared to what I called "real" cities, like New York and San Francisco. Country living sure has spoiled me. 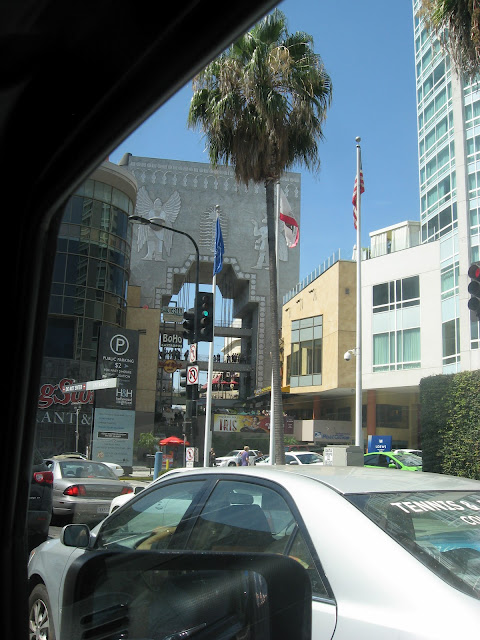 The big towering, very Hollywood, structure is the back end of the Kodak Theatre, now renamed the Dolby Theatre, where the Academy Awards used to be held. There's a nice little shopping mall in there too. It's located at Highland and Hollywood Boulevard. 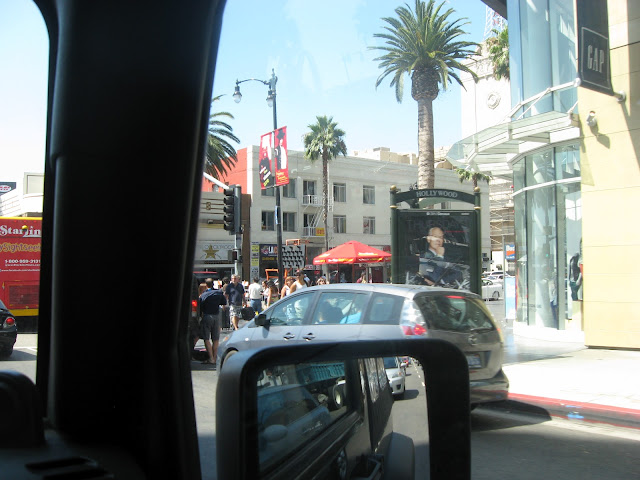 At the corner of Highland and Hollywood Boulevard. You can see everything on Hollywood Boulevard. While I believe it has been cleaned up quite a bit from the way it used to be, tourists, local characters, weirdos, prostitutes, drug addicts, run away kids, and dreamers are still part of life on the boulevard. 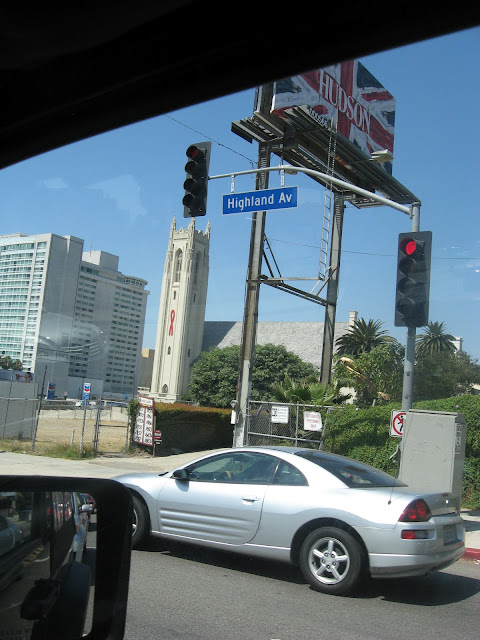 During the height of the AIDS epidemic in the 1980s and early 1990s, this Catholic church held many memorial services. I went to one there for my friend Tony, who was also my boss for a while at UCLA. It was so incredibly sad because the majority of people who attended were dying. And you looked at them, many were young, and you knew they were dying, but you didn't know what to say, you felt so helpless. This happened often. I would run into a guy I hadn't seen for a while at UCLA, and all the signs of AIDS were there. So what do you do? I would stop and say hello and act normal, but things were not normal then. It was an incredibly sad time. 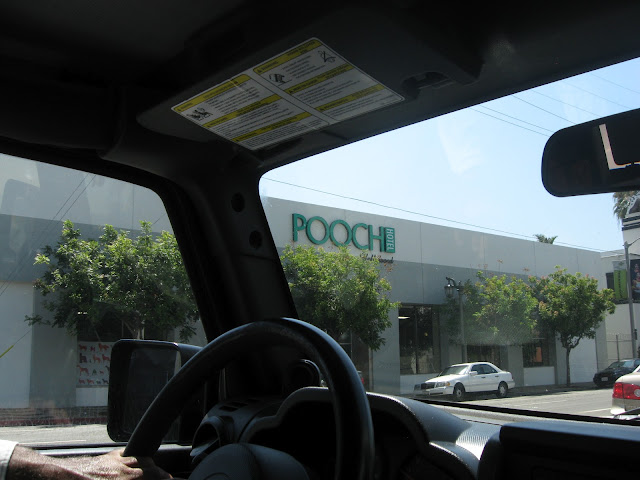 Further down the street, we came upon something I had not seen before. In one city block, there were three luxury hotels for dogs. I wish I could have stopped and checked them out. Their window displays were gorgeous. I've never seen anything like it. By the time I got my camera out, this was the last hotel, called the POOCH Hotel. Only in Hollywood, I thought. Well, maybe in Manhattan too, to be fair. 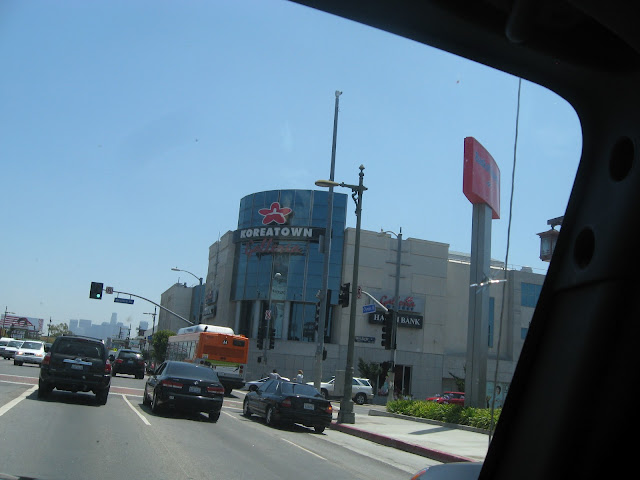 Olympic Boulevard is one of the main thoroughfares and longest streets in Los Angeles. It runs from Santa Monica in the west to East Los Angeles and a part of it runs through the neighborhood where we used to live. The name was changed from 10th Street to Olympic Boulevard in honor of the 10th Olympic Summer Games, held in Los Angeles in 1932. Here we're approaching Koreatown. 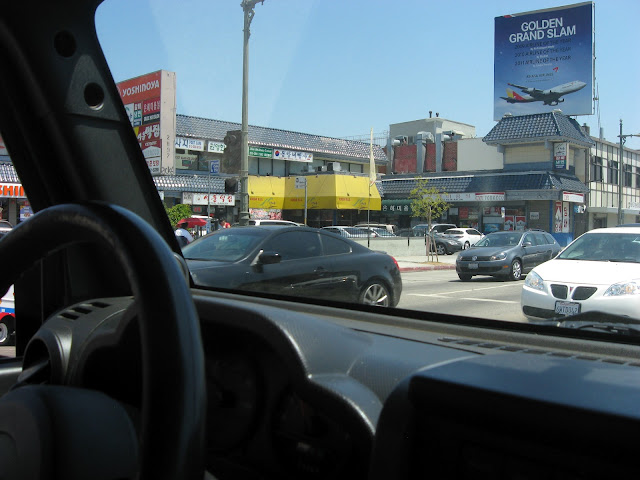 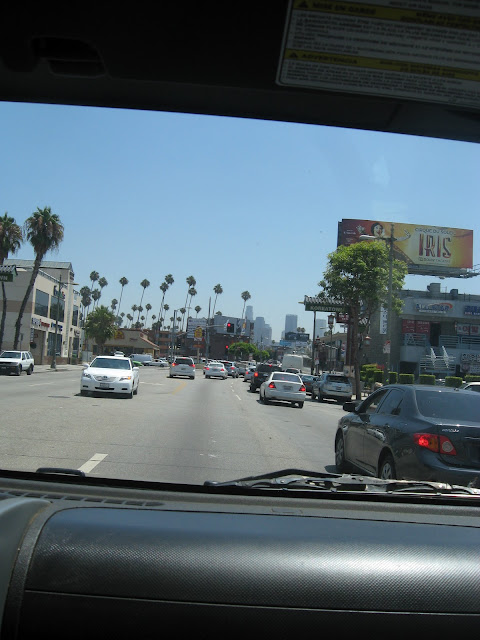 I liked the swaying palm trees with a view of the tall buildings of downtown LA in the background. Another thing I really liked about living in Los Angeles was the fact that tall buildings have their place in certain areas of town and the rest is residential, like one big suburb, but it really is the actual city. We lived one block south of Olympic Boulevard and had both raccoons and opossums as frequent visitors to our backyard. 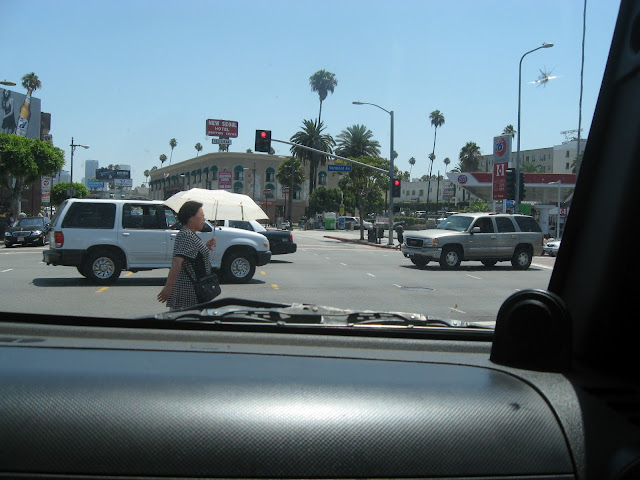 An Asian woman, using an umbrella for sun protection. 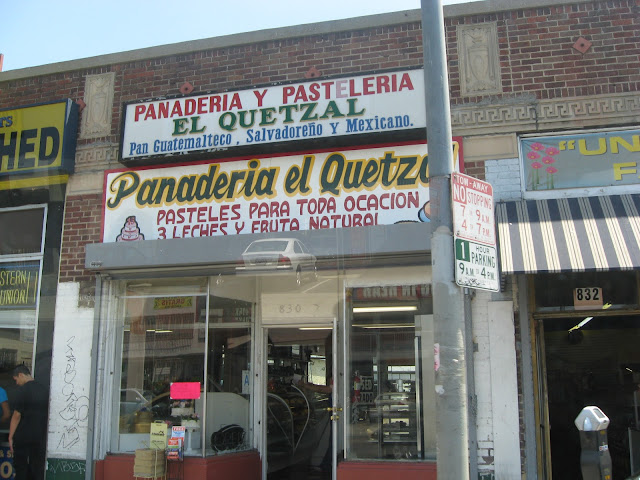 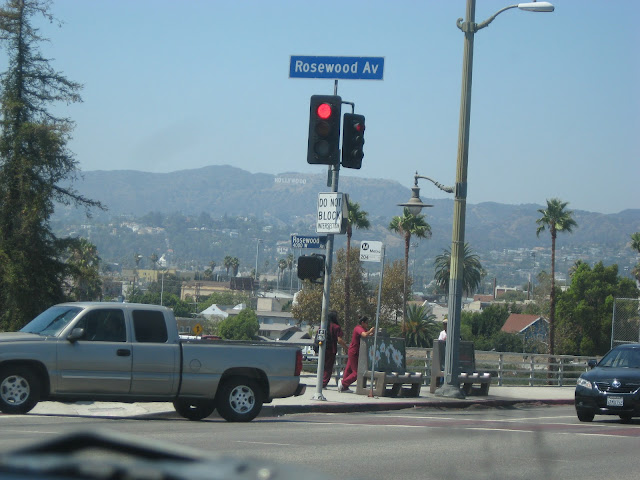 In LA, you notice the smog when you look toward the mountains. Here I tried to capture the Hollywood Sign. Not an easy feat, but I think you can see it up in the hills in the middle of the picture. 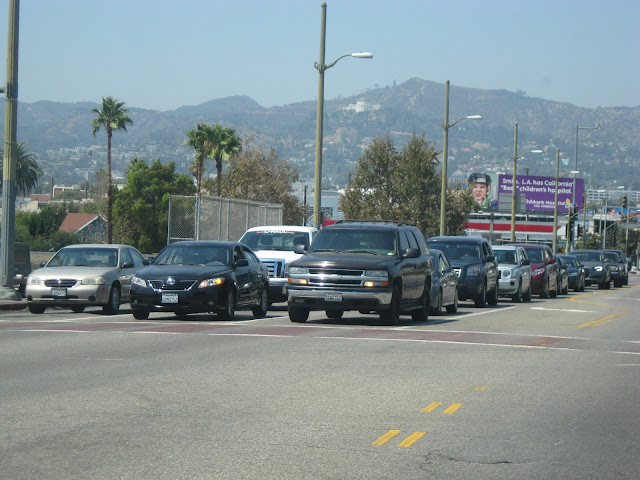 The white building in the hills in the center of this picture is the Griffith Observatory, home to the Samuel Oschin Planetarium that puts on spectacular shows of cosmic explorations. The Griffith Observatory was also the place where the most dramatic parts of the 1955 film, Rebel Without a Cause, starring James Dean and Natalie Wood, took place. Soon after this, we hit the freeway and were on our way back home.