Well, I couldn't resist the lure of a year-end list. Mine covers my favorite books from my 2010 Wednesday's Book posts. These books are not necessarily the very best books I read, although some are that too, nor are they the books I enjoyed the most. Maybe I should describe them as the books that touched something in me, the books that I responded to.
Non-fiction: 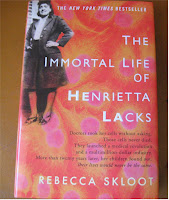 The Immortal Life of Henrietta Lacks, by Rebecca Skloot


This was by far the most important and interesting book I read in 2010.  Henrietta Lacks died from cervical cancer in 1951. Before she died, her surgeon took samples of her tumor cells and put them in a Petri dish. Henrietta's cells started to grow and they have never stopped. According to the book, you can find HeLa cells, as they are called, in almost any lab in the world. Henrietta's cells have been part of cancer research; they have helped develop treatments for herpes, leukemia, influenza, hemophilia and Parkinson's disease; they were used to develop the polio vaccine, to study viruses and the effects of the atom bomb; they played a part in important advances in medicine like in-vitro fertilization, gene mapping and cloning, and have been used for many, many other purposes.

While her cells led to many important discoveries, they were taken without Henrietta's consent and her family didn't know for twenty years that her immortal cells had become a multi-million dollar industry. Ten years in the making, this poignant book tells the story of Henrietta, her family, and how the author finally gained the trust of Henrietta's children. The book raises questions about who controls our bodies, about biomedical ethics, and it reminds us of tragedies resulting from racial politics in medicine. This is a quote from the cover of the book: "Doctors took her cells without asking. Those cells never died. They launched a medical revolution and a multimillion-dollar industry. More than twenty years later, her children found out. Their lives would never be the same." The MUST READ book of 2010. 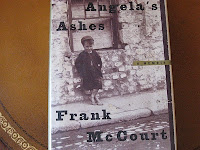 Angela's Ashes, by Frank McCourt
For some reason this book sat in my bookcase for years, unread. When I finally read it this past summer I fell in love with the way Frank McCourt describes his impoverished childhood in Ireland with a great spirit, warmth, humor and a total lack of self-pity. Since this book was so popular, I'm sure many of you have read it. If you haven't and want your spirits lifted, do read it.

Strength in What Remains, by Tracy Kidder


This book tells the story of a young man's journey. It is a story of Africa in the worst of times and the best of times; of people committing horrendous acts and of people providing  incredible help. It is a story of New York City, of Harlem and Central Park. A story of a young man who came there with $200 in his pocket and encountered mean people and kind people. Ultimately, this is another wonderful book about the strength of the human spirit. 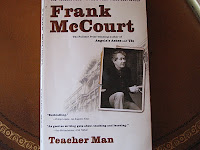 Teacher Man, by Frank McCourt
As I said above, I fell in love with this author. This book tells the story of the 30 years he spent teaching high school in the NYC public school system. Probably one of the more difficult jobs to take on. At first he has no idea what he's doing, so he starts telling stories. Wonderful stories from his childhood in . I can just see these tough and unruly New York teenagers not wanting to listen or learn at first, but then, in spite of themselves and their tough exteriors, slowly beginning to do both and to give their teacher the respect he so deserves.
Fiction: 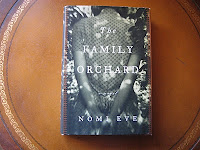 The Family Orchard, by Nomi Eve
Nomi Eve is blessed with magical writing skills, there are twists and turns in this novel that will enchant and bewitch you. The story follows several generations of a family over two hundred years. It begins in ; most of it takes place in , later ; and it ends in the . On that 200-year journey, I was transported to an enchanted land, filled with both reality and dreams. There I met exquisite women and men with magic skills, people who could dream and who could tell stories so fantastic you never knew or cared if they were real. This, a first book by this author, was published several years ago and also sat in my bookcase, unread. I cannot tell you how happy I am to have finally picked it up and read it. By a very wide margin this was the best fiction I read in 2010. 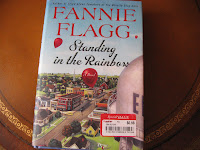 Standing in the Rainbow, by Fannie Flagg


A long time ago, I read Fried Green Tomatoes at the Whistle Stop Café by Fannie Flagg, liked it, and saw the film when it first came out. In this book, Fanny Flagg presents a small town in from the Andy Griffith, Beaver Cleaver era. A town where most everyone is the same, shares the same beliefs and has a white picket fence. But in the midst of all this, the most unusual, zany, weird, interesting, and hilarious characters appear. A well-written and very funny account of life in small-town . You will laugh out loud, I promise. 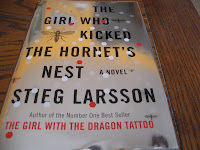 The Girl Who Kicked the Hornet's Nest, by Stieg Larsson


I read the Millennium Trilogy by Swedish journalist and author Stieg Larsson with a mixture of pride and horror. I was happy to find myself on the south side of , my home town, and in the pretty landscapes surrounding it, but horrified at the dark underside of Swedish society the author so aptly describes.

By now, I'm sure everyone has heard of the trilogy: The Girl with the Dragon Tattoo, The Girl Who Played With Fire, and The Girl Who Kicked the Hornet's  Nest. These well-written and interesting books cover a wide range of subjects from crimes against women, Nazis and neo-Nazis in , financial crimes, the Internet, hackers, the Swedish Secret Police, running a crusading magazine, and much, much more. The books truly come alive once the Girl of the titles, Lisbeth Salander, the most fascinating heroine ever to appear in any crime fiction I've ever read, makes her entry on a page. Lisbeth is an astonishing heroine for our times, totally outside any middle class box and endowed with gifts that will make your jaw drop. Little by little you get to know her as you read the three books. The author did a wonderful job of sharing a bit of her story here and another bit there, all the while telling several other stories, but never losing the thread. It all comes together in this final book and the ending is just about the only ending possible for Lisbeth and the Millennium Trilogy.

Lisbeth Salander may not be for everyone, but I will never forget her and doubt I will ever meet another heroine, in another book, that I will so admire in spite of both her and myself.


I also read Pearl Buck in China, a biography by Hilary Spurling, which led me to re-read The Good Earth, by Pearl S. Buck, both great books. Another book I liked was The Crimson Petal and the White, by Michel Faber, a story of a bright woman who attempts to create a future for herself in Victorian London. A strange, but good book. It has sort of lingered in my mind, as a good book should.
You can check out all the books I wrote about by clicking here.
Posted by Inger at 6:15 AM