J is for Jazz 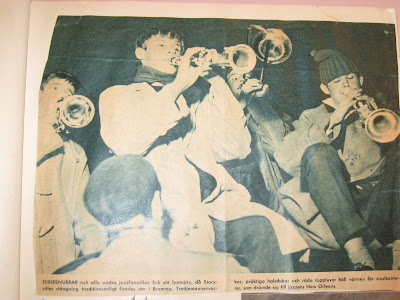 When I was young, before Elvis, before Chuck Berry, Little Richard and the birth of rock and roll, there was a revival of New Orleans jazz in Stockholm. Bands formed all over town and played at school dances and at jazz clubs in Old Town. On Sunday afternoons, bands, pretending to be on Bourbon Street, marched down the streets of Stockholm to play at the matinee at Nalen, a dance palace we were only allowed to attend during daylight hours.

And so I learned about the beginnings of jazz; I read about Buddy Bolden, King Oliver, Bunk Johnson, and Storyville where it all began. I listened to their music on 78s. Muskrat Ramble with Louis Armstrong was my first record. When he came to Stockholm in 1955, I went to his concert and I was as thrilled as all those girls who greeted the Beatles in New York City nine years later. Not loud like them, but so happy to listen to someone like Louis Armstrong, live. 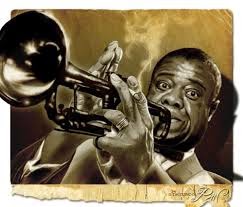