S is for Samson ~ Samoyed Dog ~ A Love Story

We adopted Samson from a relative after Samson's litter mates had all died, and he felt he couldn't sell him. Samson was seven weeks old at the time. 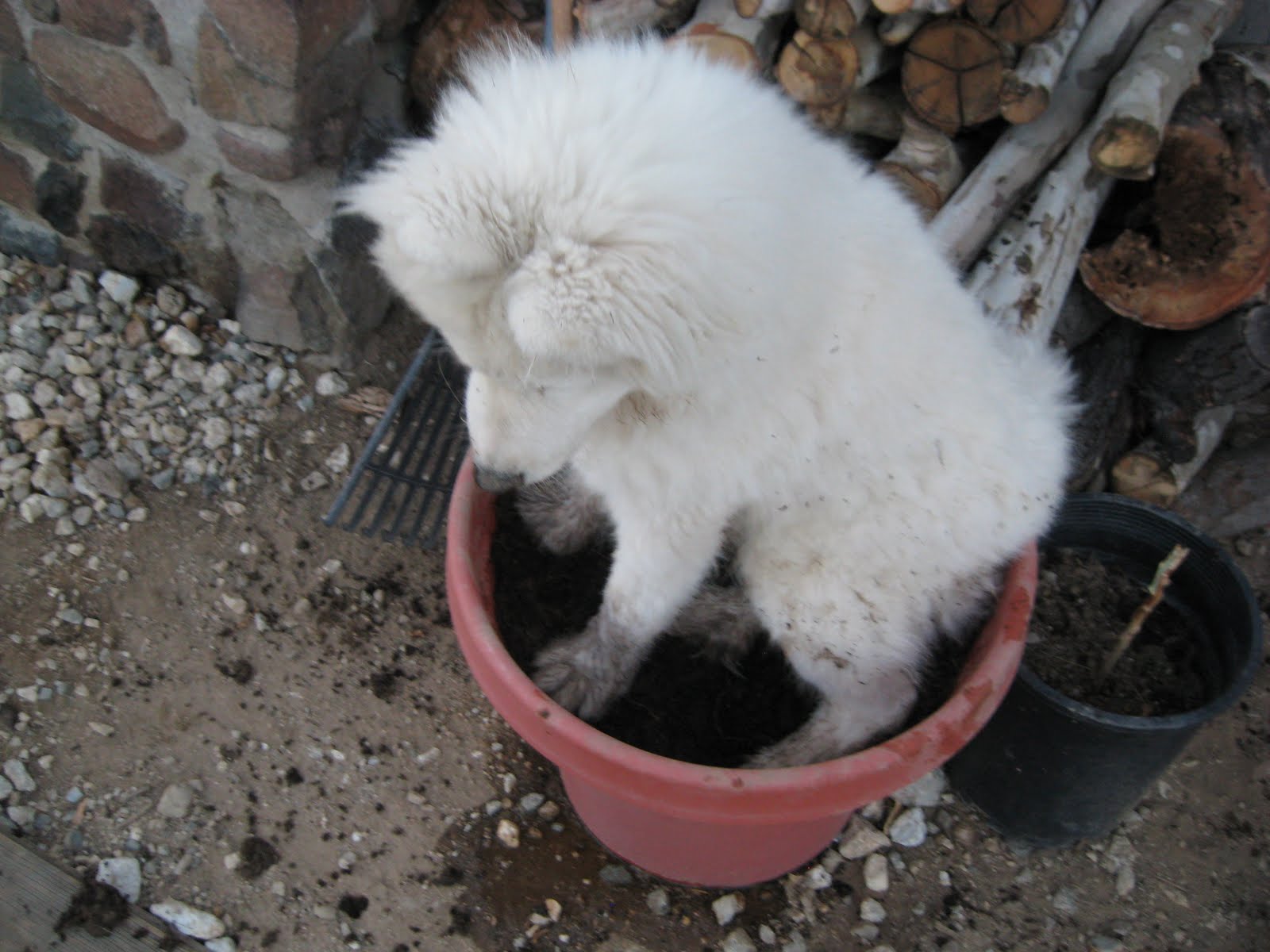 At less than two years old, Samson developed pancreatitis, and at three he suddenly became blind. He was diagnosed with UDS, a canine disease primarily found in Akitas. Only the quick actions of our vet, who immediately put him on steroids, restored Samson's sight. He is healthy now, he only needs eye drops every three days, and a vet visit every three months. But our vet thinks his immune system is iffy. Samson will be five in July. 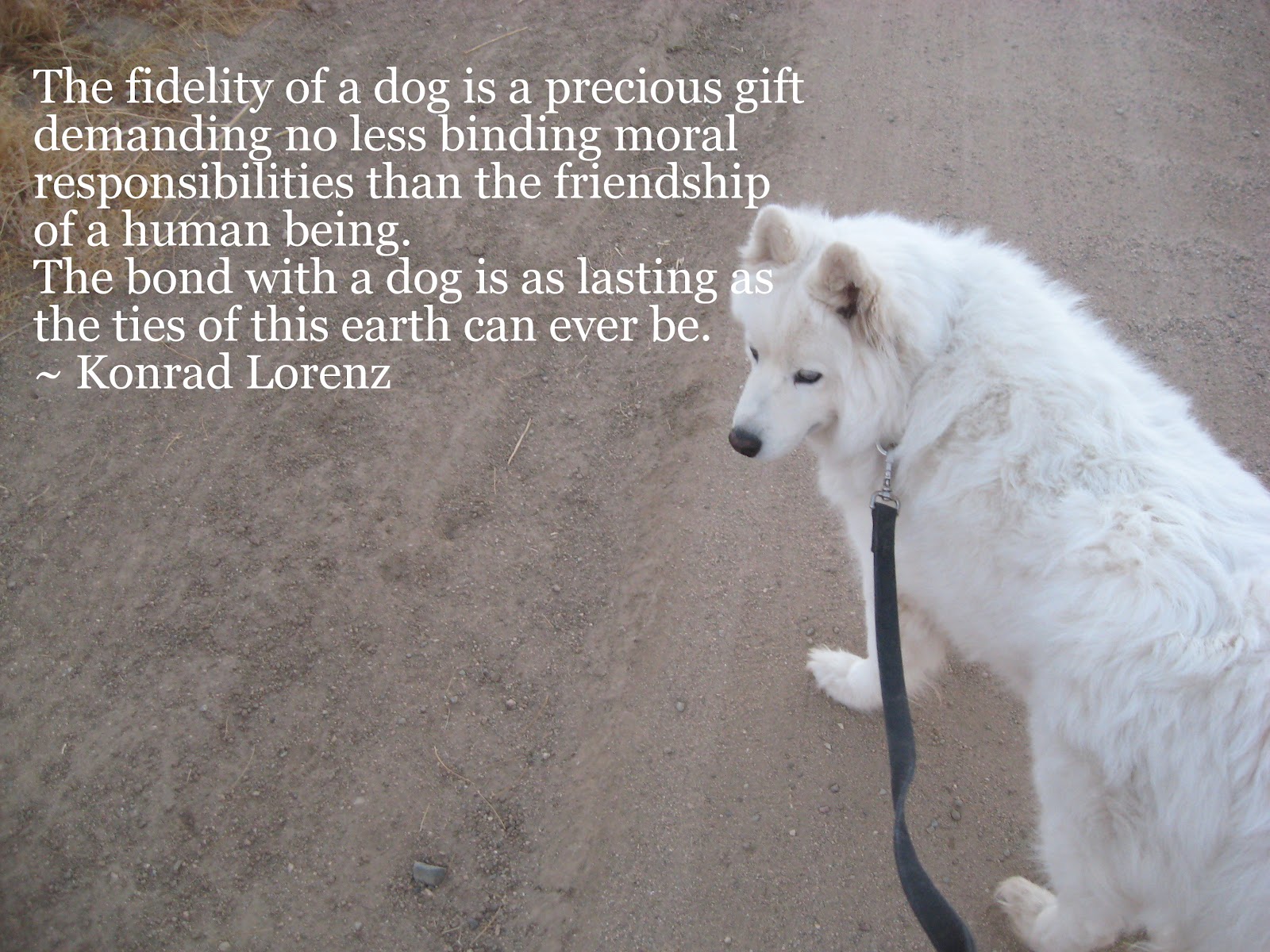 I posted this, my commitment to Samson, when I wasn't sure if he was going to survive and not sure I could stand the heartache of losing yet another dog.


From the Westminster Kennel Club:

"The Samoyed is an ancient working breed developed by the nomadic Samoyed people of Siberia. His jobs included herding reindeer, hunting and hauling sledges and guard work.

The Samoyed people depended upon their dogs for survival. Samoyed dogs actually slept in the shelters with their people. Their exceedingly close association with humans helped to imprint a wonderful temperament on the breed with the smiling face, laughing eyes and stunning silver tipped coat. The Samoyed, a working dog, is happiest when he has a job, even if it is just bringing in the daily paper." 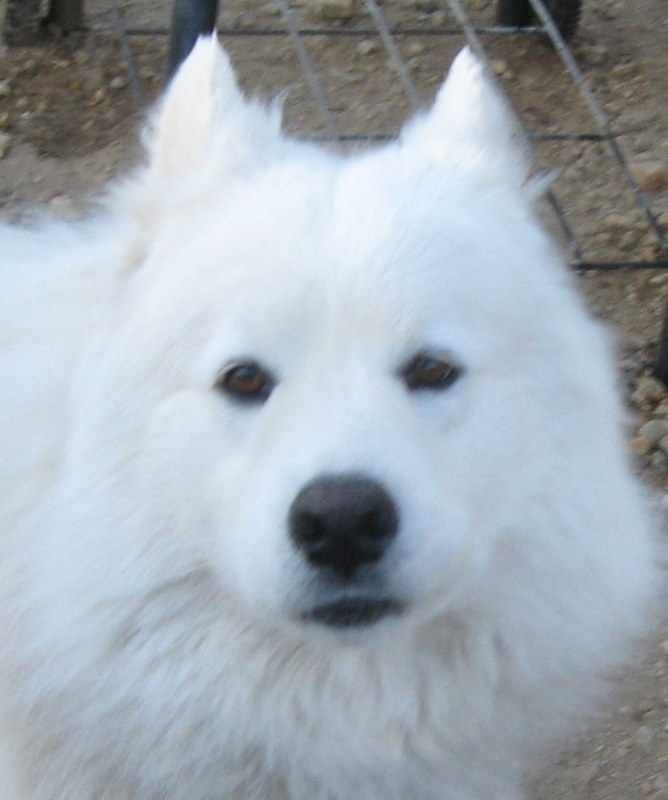 Recent DNA analysis has led to the Samoyed being included among the 14 most ancient dog breeds, along with the Siberian Husky, Alaskan Malamute, Chow Chow and 10 others. Samoyeds have been bred and trained for at least 3,000 years. 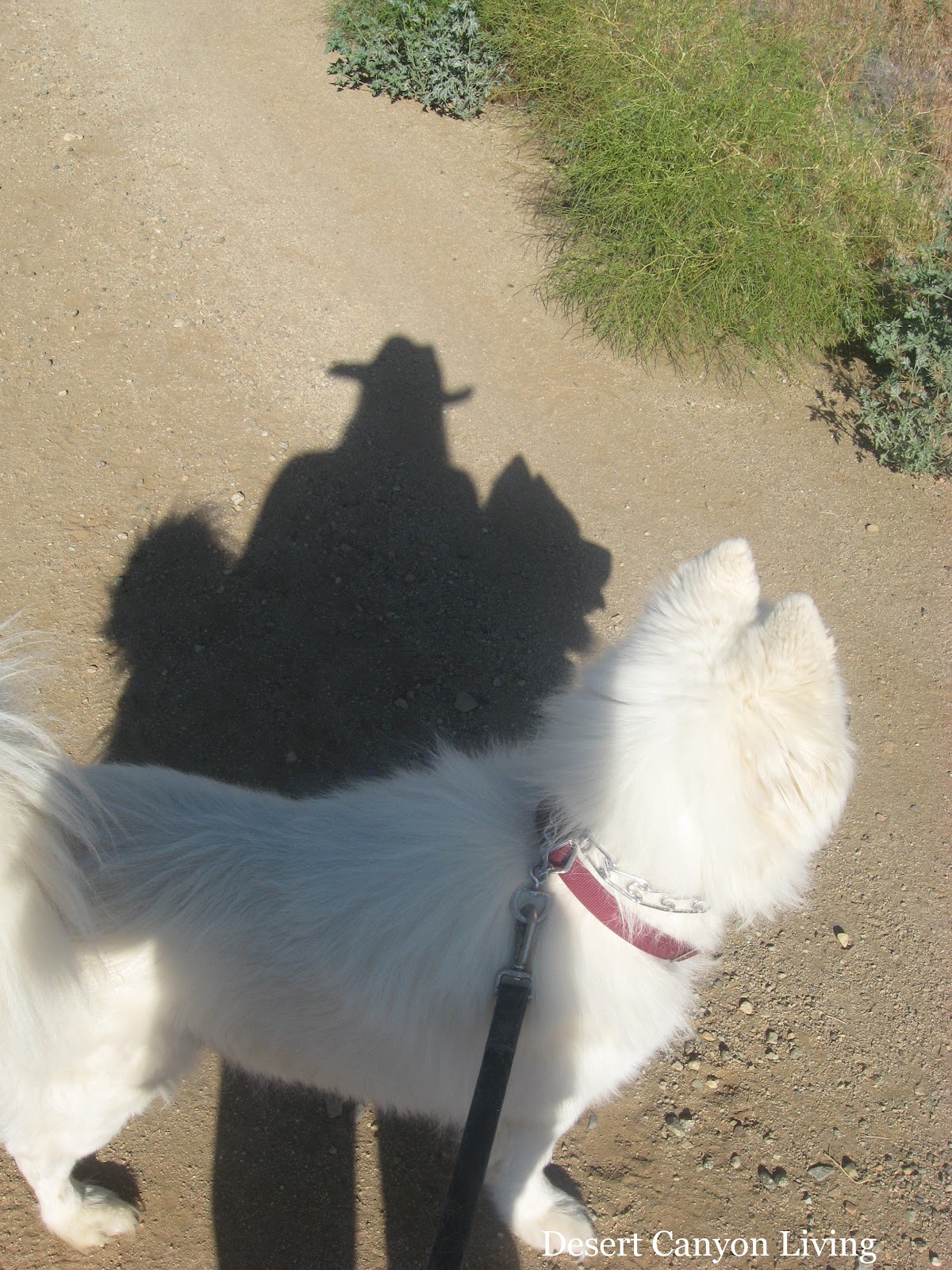 Mommy knows how much I like to work, so she lets me take her for a walk every morning. That's a very big job for me. Once we ran into a trespasser and I had to show my powers, I growled and lunged at her, and was so fierce she thought I was a German shepherd dog. I scared her away, she's never been back.

When mommy fell and hurt her ribs, I put two paws on one side and two on the other side of mommy's body and then I stood over her to protect her from wild critters until daddy came with the Jeep. I'm very responsible. 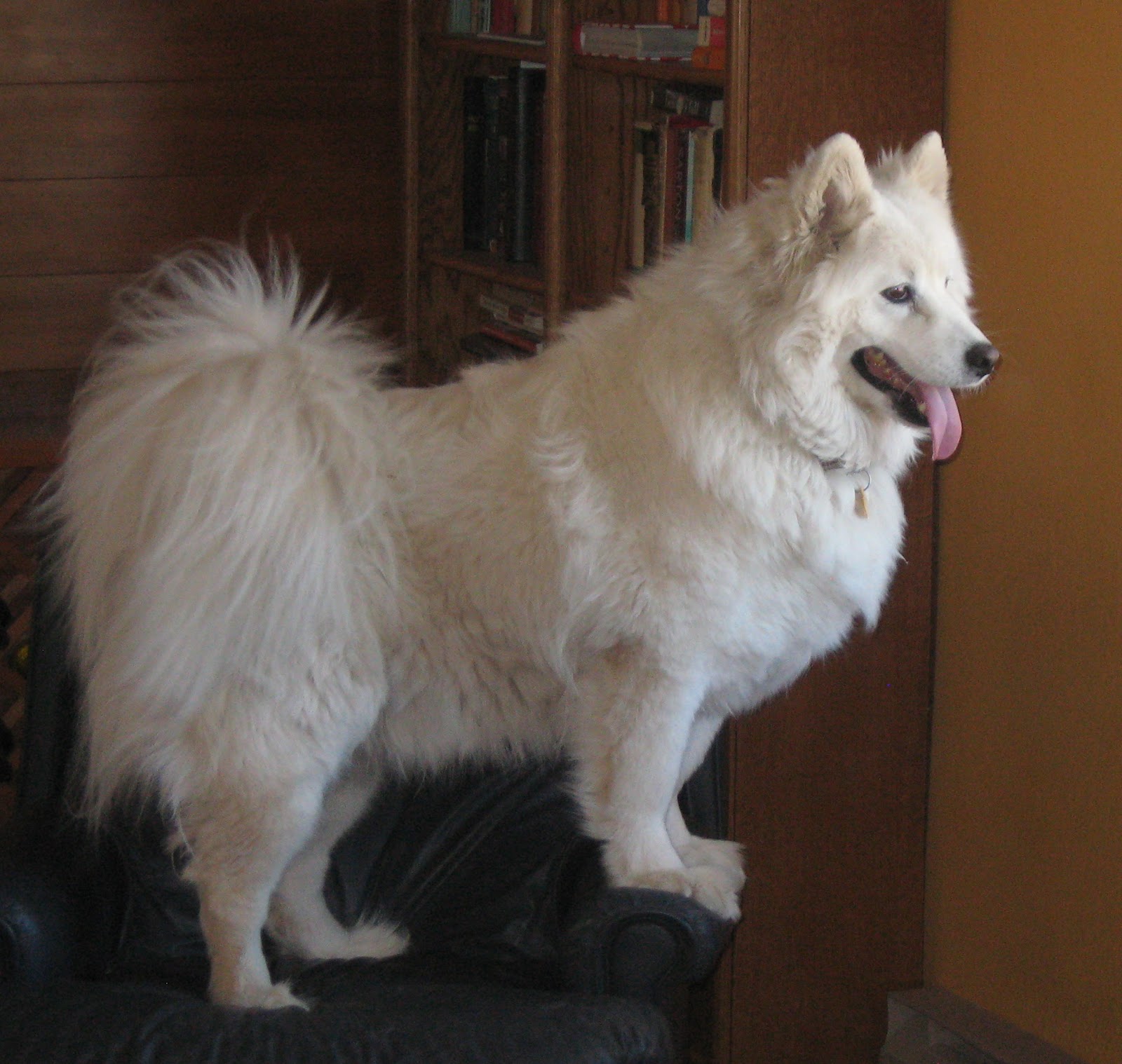 Mommy takes me to the shed where she does laundry. When she hangs it on the line, I go with her and sit by her side and guard her. You never know who may come, maybe a bear or another trespasser I need to scare away.

Then we walk together around the place and pick up stuff, I don't know why we do this, but I follow along. When mommy cuts down those stupid bushes in the field, I keep an eye out for intruders. She says I make her feel safe. 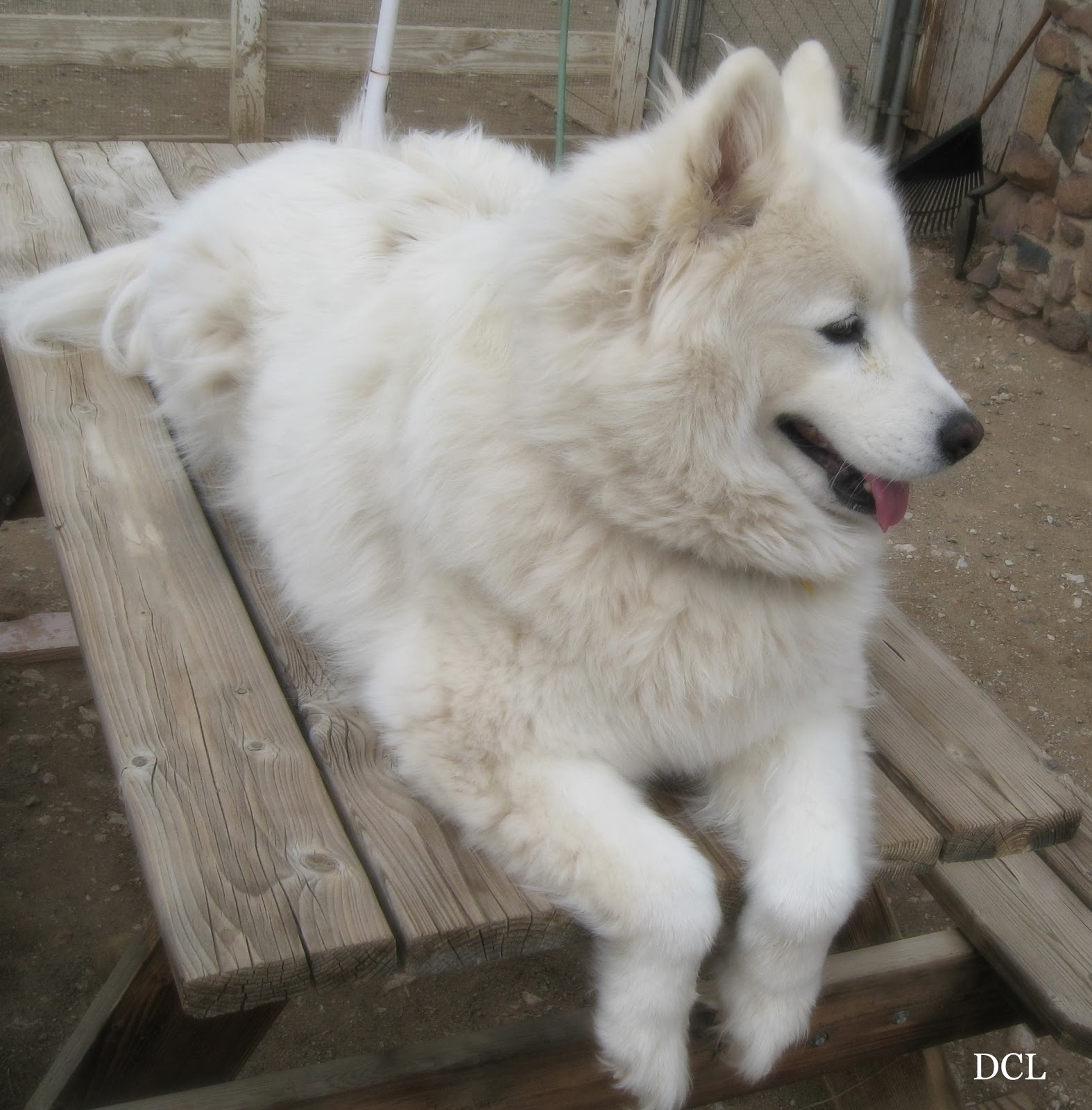 Last year they put the picnic table in my dog run and it has been my lookout post ever since. I survey my land and make sure my tenants (rabbits, ground squirrels, gophers, and all the birds) behave themselves. 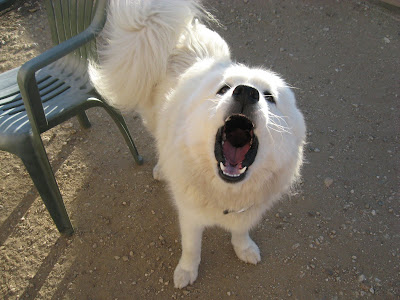 And if the coyotes come by and try to scare me, I have to remind them I'm not far removed from my ancestors the big wolves of Siberia.

I am engaged to my love, Gracie, a little white Cockapoo who lives in Maryland. I know, it's far away and since both our mommies are so dependent on us, we will be an online couple forever. 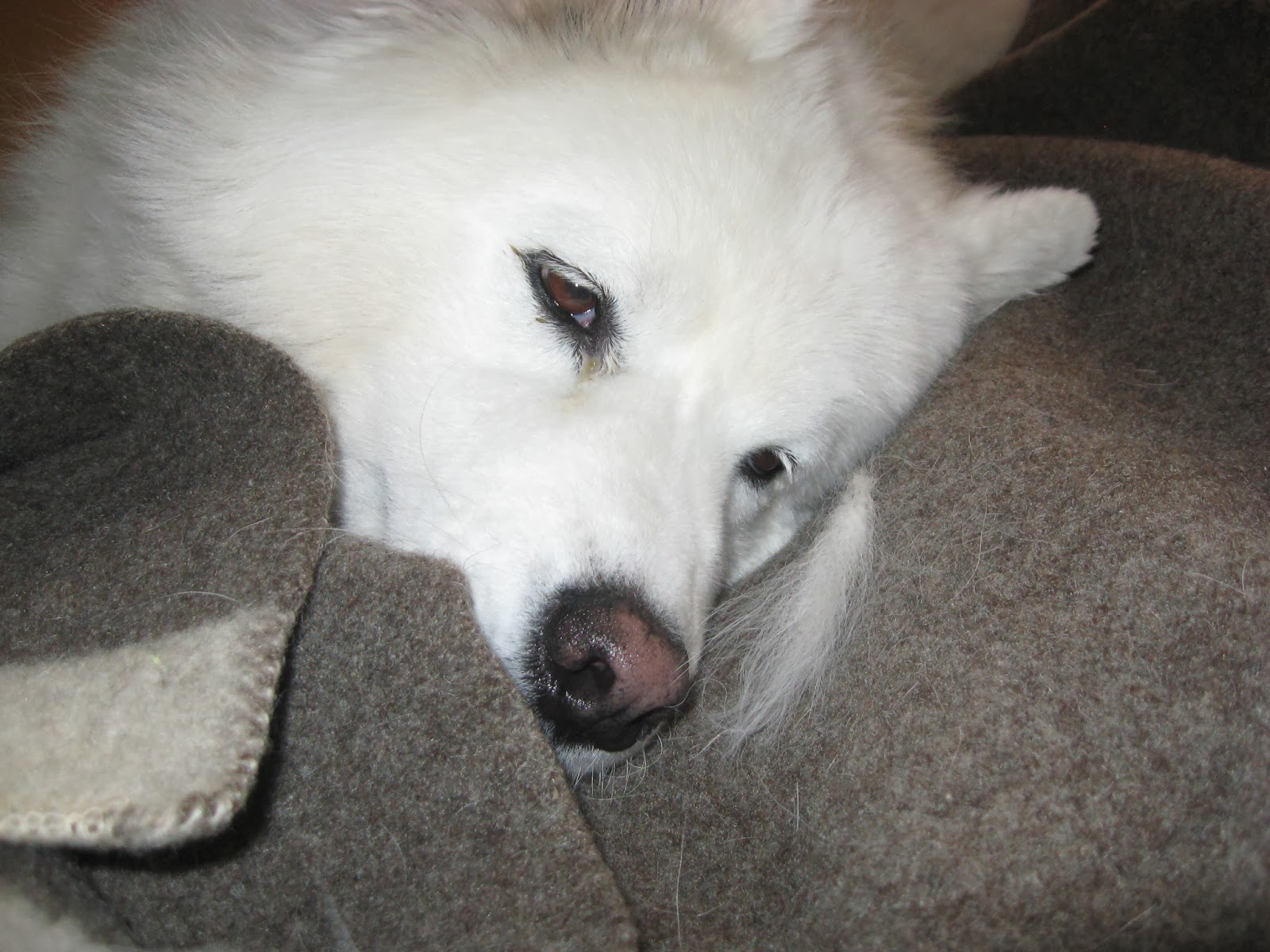 Since I'm the only dog around here now, I'm pretty busy helping mommy. And that's why I like my nap after all my chores are done.

Me: Since Samson became our only dog, he has proven to be exceptional. He was trained as a puppy by our German shepherd dog, not by me, yet he seems to understand everything I ask of him. He is very communicative and very kind. His complaining dog blogger personality is just a front. Samson has won my heart and my unconditional love for him knows no bounds.