Welcome Laura, a new follower of my blog. Laura, if you have a blog, I would like to follow you there, but you didn't provide a link when you signed the Follow form. If you comment my next post, I can reach you that way. If you don't have a blog, then I'm just happy you decided to follow mine. Welcome.
It's a cold and windy day in the canyon with snow flurries and gray skies. Soldier, my 77 lb lapdog, has lately gone out of his way to show me what a good guard dog he is. Last night a big truck drove up and three guys got out. I knew them, they come up to the canyon every now and then looking for sheet metal, primarily. I let the dogs out in their dog run and they barked like crazy, of course. I noticed that Soldier was especially aggressive and continued barking long after the guys drove off. And then I knew that should anyone come here and try to do some harm, Soldier would be the dog that would attack. I never saw that so clearly before. This morning, the dogs went bananas barking again, but I couldn't see anyone or anything. After a while Angel and Samson quit, but Soldier went on and on. 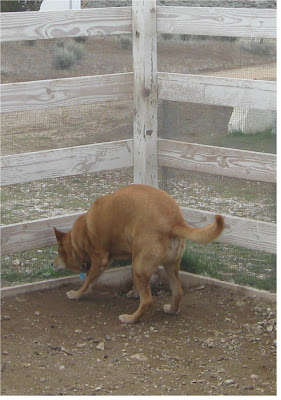 Then he bent down and looked low along the ground for something or someone. He was so intent and focused and in an aggressive mode. I've never seen him quite like this before. And I know he's no fighter and tries his best to avoid male dog conflicts with Samson, who is definitely the pushy one of the two, and by now the alpha male. 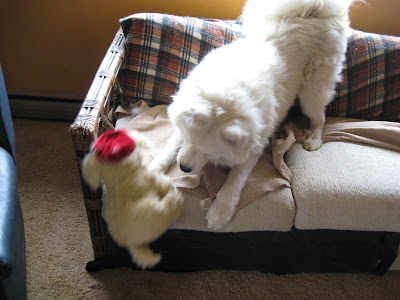 Inside the house, I gave Samson a new toy, a big stuffed dog that came up with my husband's move. Angel immediately wanted it too. But Samson was off and running wildly around the living room, up the love seat, down on the floor, up on the couch, chewing and shaking his new toy vigorously. 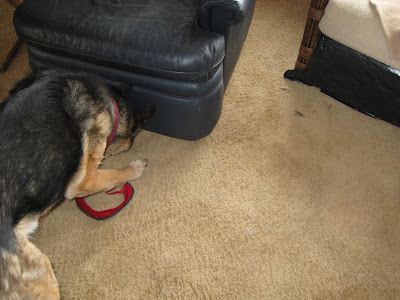 To make Angel feel better, I untied the dog's collar and gave it to her. 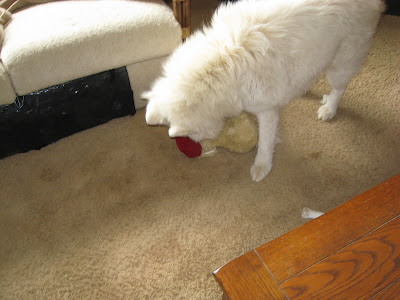 Samson continued to chew on his new toy, 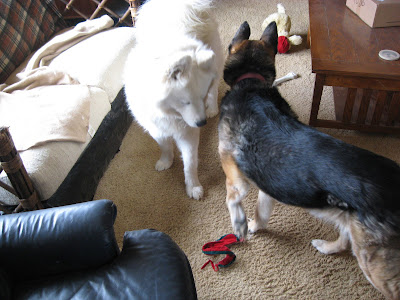 but then he got curious and wanted to see what Angel had. 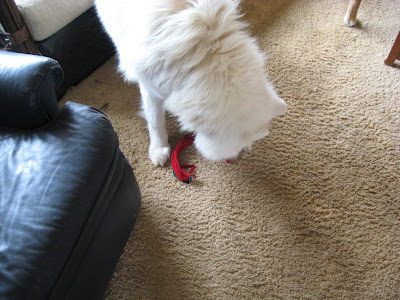 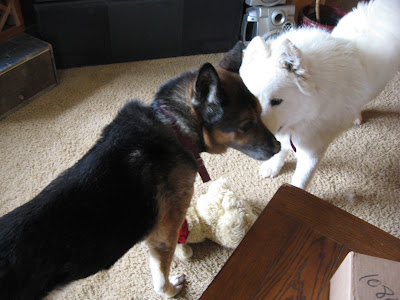 But too late! I heard a huge growl coming out of Angel and saw that she, who'd kept her eye on the prize the whole time, now had it firmly in her possession. 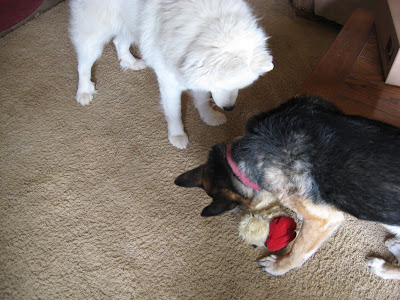 Samson says: Oh, please, I want to play with my toy, I was only checking your toy out. Can I have mine back, please, please? 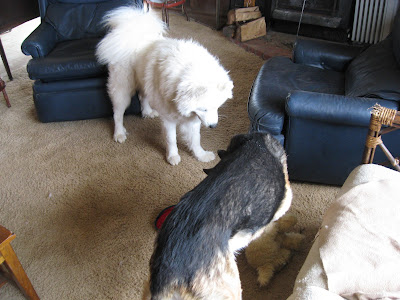 Angel is having none of it. She picks up the dog 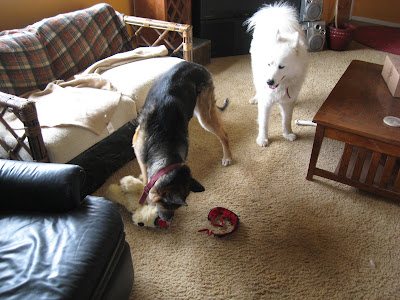 and carries it over to where she left the collar. Now she in possession of both dog and collar, while Samson stands there with his mouth open and a look of dismay on his face. 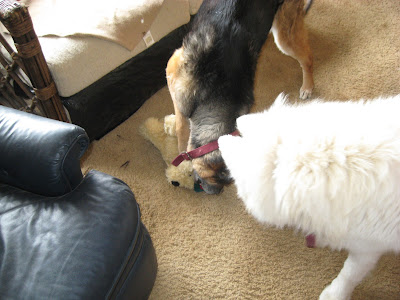 I'm wondering if Angel is teaching Samson yet another puppy lesson here: Watch your catch at all costs and don't get greedy. Or something like that.
Posted by Inger at 1:18 PM