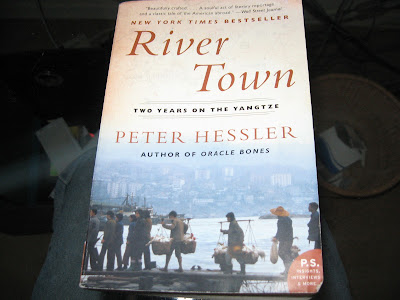 By Peter Hessler
The river is the Yangtze and the town is Fuling, a small city in 's province. Peter Hessler spent two years there as a Peace Corps volunteer, teaching English and American literature at from 1996 to 98. Hessler and his fellow teacher, Adam Meier, were the first Americans to live in Fuling for more than half a century. As an American, Hessler caused quite a stir in town and had to deal with crowds, usually friendly, but extremely curious and in his face.
He also had to deal with vast cultural differences in his interactions both with students, faculty, and administration at the college. Throughout the book, he describes various situations that often become very funny as the result of misunderstandings. But Hessler is there to learn as well as teach. He studies Chinese and while his interactions with his tutor are also fraught with misunderstandings, he learns the language. And he learns from his students too and as time passes comes to a better understanding of them and their society.
In town he befriends an old Catholic priest, Father Li, who has been a priest there for over 50 years. As Hessler says, an eternity in Fuling. He visits and has tea with Father Li and listens to him talk, both about days gone by, and the old priest's present concerns about his parish and its mainly elderly parishioners.
Hessler says he ate at least once a day at a place called the Students' Home noodle restaurant, often alone. There, as he befriended the owners and their toddler son, he got  many insights into the everyday life of a Chinese family.
Hessler also traveled to different parts of the country. I liked his travels on the the best. He describes the river beautifully: I could see in my mind the terraced hills, the fields tended by farmers, the bright yellow of rapeseed, the more mellow colors of wheat, old tombs on mountain sides, pagodas, and the river, the mighty Yangtze, that was soon to be tamed into the Three Gorges Dam.
In each chapter, the author teaches the reader something about : Its history, customs, politics, language, mind sets, geography, and so on. Hessler weaves stories, commentaries, and historical events that connect to the main story of a chapter in and out of that chapter so well. You read this book, you enjoy it a lot, while at the same time you learn a about in depth. always entertains while it educates the reader. To me, this is brilliant writing.
I just started the second book by this author, called Oracle Bones, also set in . Jane lent it to me and it promises to be just as interesting and absorbing as . I recommend to everyone. A great book!
I was so happy when I opened my blog this morning and found all your comments. I'm glad you enjoyed learning about the Dala horse. As was I,  since I didn't know either and had to look them up. One of the side benefits of blogging is that you learn, both from what you have to write about and what you find on your friends' blogs. I had no idea that this would happen when I first started blogging. Have a nice day everyone, it will be a stormy one here in the canyon and tomorrow, we may even get some snow!
Posted by Inger at 7:43 AM