Wednesday's Story - The Roadrunner And The Deer

I have read several books in the past month, including these that I will review soon: , A Guide to the Birds of East Africa, Zeitoun, and Brother I'm Dying.  I will get to them soon, but with all that's going on I haven't been able to concentrate on the books and writing a review. So, I thought I would mix up Wednesdays with a new feature: Animal stories, wild or tame, written by me in the past few years. So I will post a Wednesday's Story when I don't have a review ready. I hope you will enjoy them.
I wrote this story about a roadrunner couple that lived here in 2008 and an encounter one of them had with a deer.
THE ROADRUNNER AND THE DEER
This past spring, a roadrunner and his mate took up residence on our ranch in the desert mountains of . The male would come at dinner time and parade outside our dining room window, catching bugs, worms, snakes and lizards. 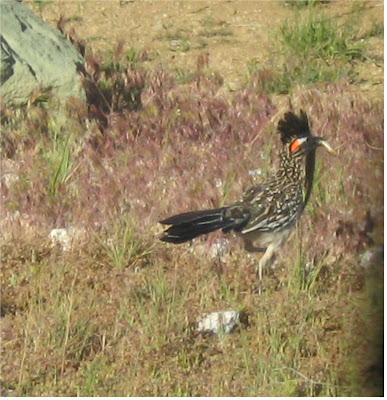 Do you see the snake in his beak?
One day, I heard a strange noise and as I looked out the window, there was the road runner on top of our old Mustang with a huge desert toad in his mouth. It seemed impossible that he could have caught this large toad that he proudly displayed by jumping around on the hood of the car, turning his neck this way and that. When he spotted me, he took off across the field with what must have been a pretty heavy catch in his beak.
In July, there was a large forest fire to the north of us and in the weeks following, several deer came to the ranch. 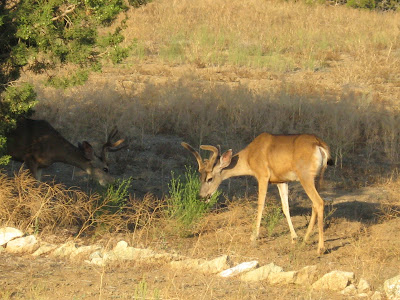 One day, three bucks appeared and slowly walked around the yard, browsing as they went along. 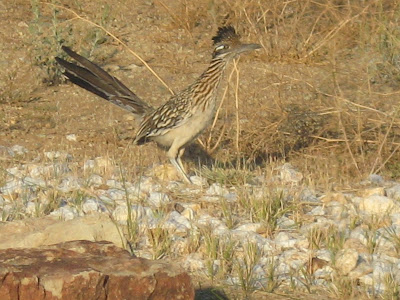 I got my camera and when I looked out the window, I saw the roadrunner just as it spotted the deer. The roadrunner gave the deer the evil eye and puffed itself up. 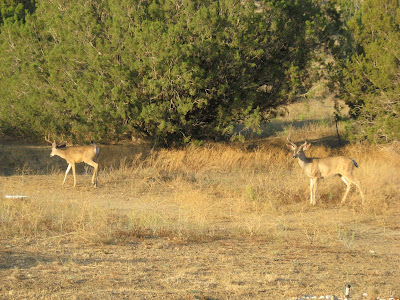 Two bucks were further up the hillside, 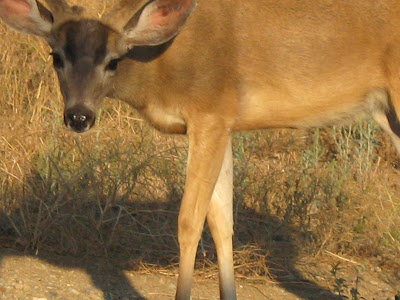 but one was still close by. 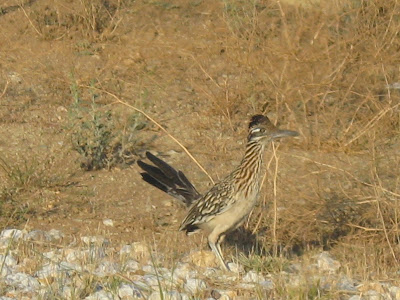 The road runner puffed itself up some more. She jumped around in place for a few seconds, then she decided it was time to get rid of these intruders and made her move: "Who are you big critters and what do you think you are doing in my yard? Don’t think you can intimidate me," she seemed to be saying to herself.  "I’ll pick the one with the smallest horns and see if I can't chase him away!" 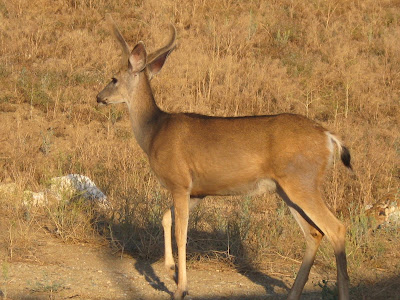 The roadrunner jumped closer and closer to the deer, but it paid her no attention at first and kept on browsing. 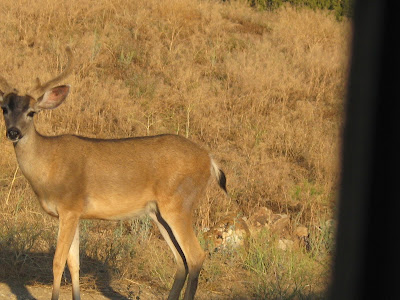 When the roadrunner reached the deer, she began to hop around it in a circle, very close to the much larger animal. 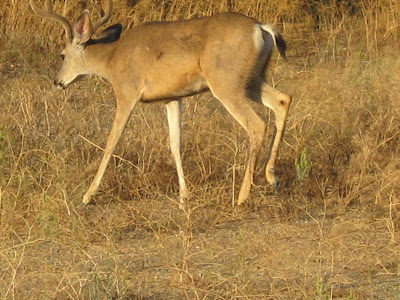 Looking slightly annoyed, the deer decided he better get out of there and trotted off to catch up with the two bucks that had walked ahead. 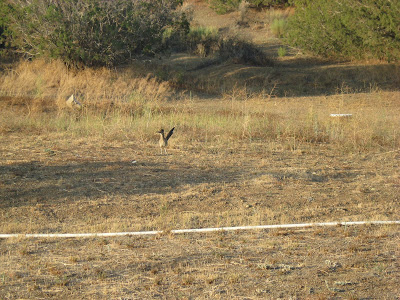 The roadrunner hopped around the deer one last time, as if to make sure it was leaving, then she proudly ran away toward her home behind the field.


I was so intent on watching this amazing dance that I forgot to take pictures. And I was hanging out my dining room window trying to see it all. But it is a true story of an interesting  interaction in the animal world and one that I was fortunate to observe.
Posted by Inger at 7:35 AM