In the summer of 1963, while I was happily frolicking in the great waves of the Atlantic Ocean off the Jersey shore, eating ice cream and checking out young guys on the beach, not too far away, the March on Washington for Jobs & Freedom took place. 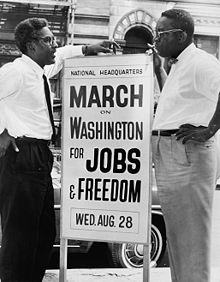 About 200,000 to 300,000 people attended the march on Washington that August. It is estimated that 75-80% of those in attendance were black. The march has been credited with helping to pass the Civil Rights Act of 1964 and the Voting Rights Act of 1965. 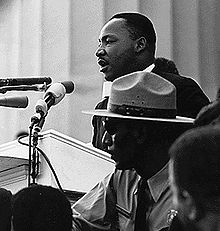 On August 28, 1963, Dr. King delivered his "I Have a Dream" speech from the steps of the Lincoln Memorial, calling for an end to racism in the United States. 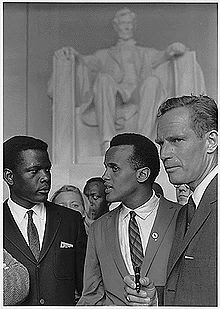 Sidney Poitier, Harry Belafonte, and Charlton Heston at the Lincoln Memorial during the march.

I want to pause for a moment here and pay tribute to those who marched, those who fought, and those who died for freedom. Those were great people, true American heroes. 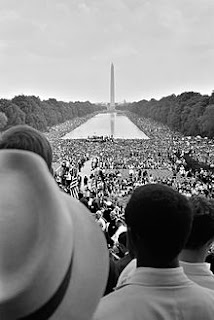 The March on Washington brought a powerful message to America; non-violence has a power like nothing else. We watched on our TV screens, where none of us had ever seen that many black people assembled before, nor had we ever heard a speech about the need to end racism in America as powerful as the one Dr. King gave that August day.

These events affected me deeply and made me more aware and also interested, on a deeper level, in the plight of African Americans. From that summer on, I took a proactive stand on the issue of civil rights for everyone.

At the end of summer, I got a "real" job, working for an economics professor at Princeton. Our President was young and life in America seemed full of hope and promise. Then on November 22nd that year, I was in a phone booth in the Forrestal Library on the Princeton campus, calling Mrs. Forrey, the woman I had worked for earlier, about something. She said, "the President has been shot!" It didn't connect, so I dumbly asked, "which president?" "President Kennedy!" she exclaimed. I know that all of you, who were alive that day, remember where you were when you heard this dreadful news. And that's where I was; students were crying, cars were stopped on Nassau Street, people listening to their car radios.  On TV, Walter Cronkite announced that the President had died, then took off his glasses and wiped his eyes.

And the events that followed will be forever etched in my memory. 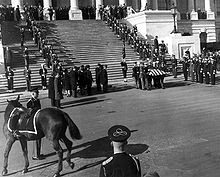 Black Jack, the riderless stallion that took part in the President's State Funeral.

And the photo we will always remember.