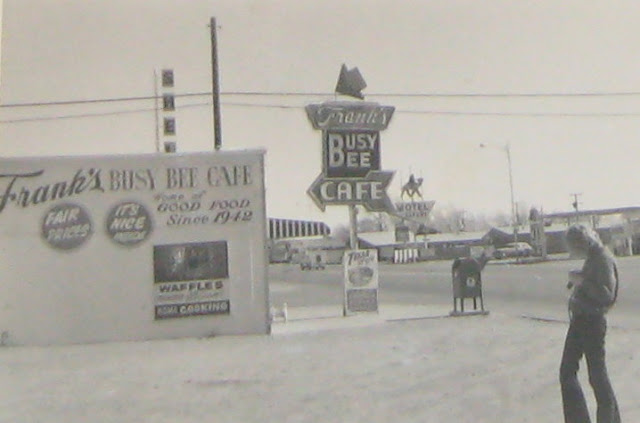 This picture, from a small town in Texas, represented America between the coasts to me then. I remember thinking that I had to capture that cafe, with it signs proclaiming: Fair Prices, It's Nice Inside, and Good Food Since 1942.

John was scared in Texas because there was still was so much upheaval, the Vietnam war was trudging along, causing conflict at home: rednecks vs. longhairs, cowboys vs. hippies, workers vs. intellectuals, everyone with an opinion all across the land. And for someone like John, with somewhat longish hair, driving a VW Bug with California license plates, the state of Texas represented real danger.

It was night, we were driving across a wide expanse on our way to Amarillo, where we planned to spend the night. It was dark, very dark, our head beams the only light. I looked up at the sky and saw stars, millions of stars, so incredibly bright. I  had seen winter skies in deserted places before, in Sweden, in Wyoming, but never like this. I wish I were a poet so I could give that sky all the credit it deserves. But I am not, so all I can say is ~ that Texas sky was lit up with millions upon millions of strong, glittering, sparkling, stars. A sky of diamonds, to borrow a phrase, except this time it was for real.

"John," I said, "stop the car, we have to get out and look at this sky." John said, "You're crazy, we can't stop in Texas in the dark, guys with guns live here. My California plates, it is not safe!" Well, I had danced with cowboys in Wyoming, gone elk hunting with them too, so I figured if guys with guns show up, let me deal with them. All the while thinking John was overdoing it a bit. I finally made him stop and he had an incredible experience, overcoming his fear, as we got out of the car and stood for a long, long time on that dark road in Texas, watching stars that reached out and touched our souls. 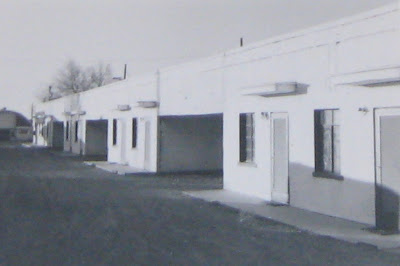 We spent the night in this motel in Amarillo. In the morning, we were awakened to a truck radio on its highest volume, Aretha singing:


Looking out on the morning rain
I used to feel so uninspired
And when I knew I had to face another day
Lord, it made me feel so tired

Before the day I met you, life was so unkind
But you're the key to my peace of mind

I never forget, I looked over at John and said, "see there's soul in Texas." 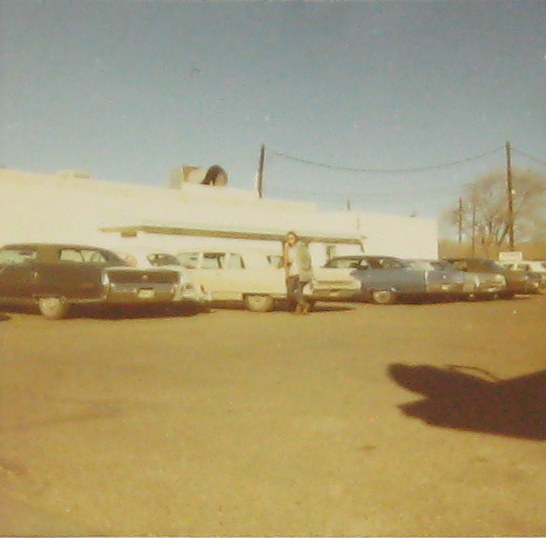 I had to take this picture of John's VW, parked between the first black car and the white one with the fins. Can you see it?

While I didn't believe that guys in Texas were dangerous, one thing I found out, they all seemed to have big cars. Outside that motel in Amarillo, I saw about as many big Cadillac cars as could be seen on occasions in New Jersey ~ when men of a certain profession held meetings at some out of the way inn. ~ Except in Jersey, the Cadillacs were black. Shiny black.