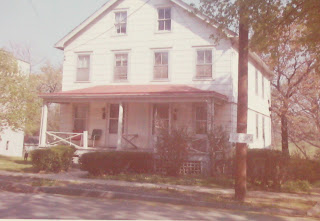 My dad came to visit me in Princeton in April 1964 when my Swedish friend, Christina, and I lived in this house, the duplex to the right. Christina and I are still friends and I stay with her or her sister, Inga, when I go back to Stockholm. 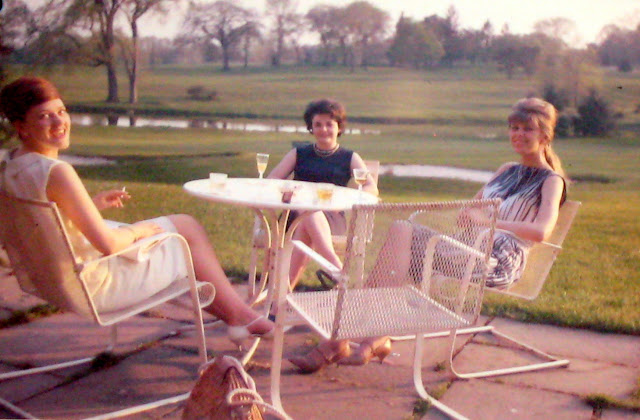 As I mentioned in my last post, I worked at the Princeton Inn and this was the view from the patio with the golf course in the background. Not a bad place to work, right? 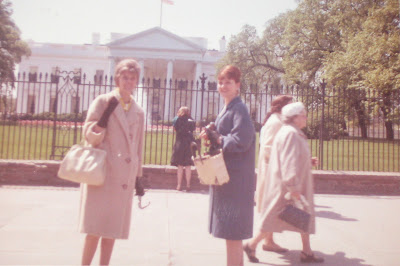 We went to Washington, D. C. with my dad and saw all the sights. I have lots of pictures and only room for a few here. 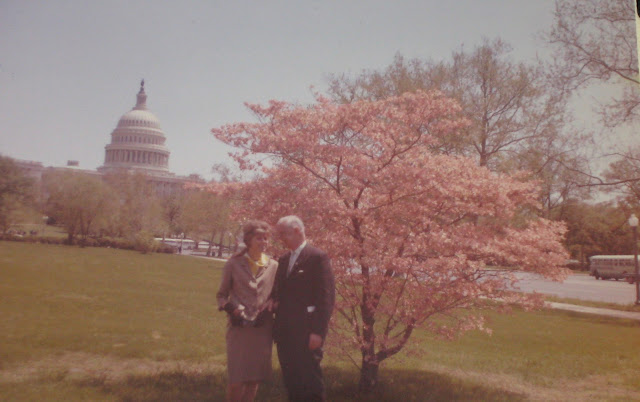 It was cherry blossom time in Washington, so we saw the city at its best. 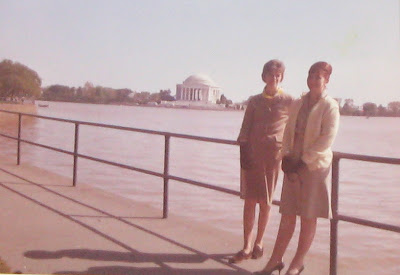 I just don't get it, how dressed up we were. Now, I wear jeans everywhere. And if I were to travel and go sightseeing, jeans is what I would wear. At least I'm wearing sensible shoes here. When I saw them in these photos, I remembered them, after all these years, my brown suede shoes. 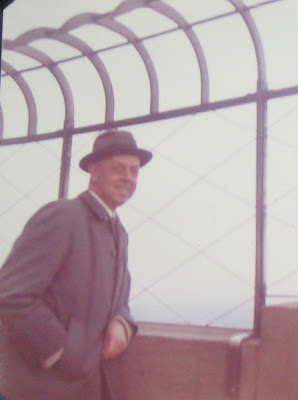 At the top of the Empire State Building

My dad was an enthusiastic bridge player and there was a world championship going on in New York City, so he went alone to Manhattan and combined his visits to the tournament with sightseeing that he did on his own. He also went to visit his uncle in Brooklyn, the one with the Manhattan cocktails I wrote about in my B post. On his way back, dad got lost in the New York City subway system, but managed to eventually find his way back to Princeton. Christina and I were worried. A world without cell phones was definitely more worrisome. 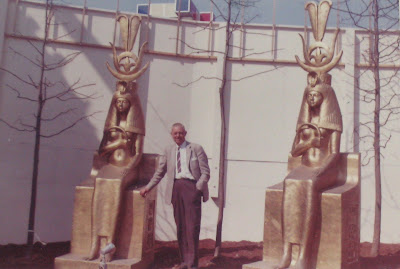 Here he is, checking out props from the film Cleopatra.  This had something to do with the 1964 World's Fair, but it wasn't the fair, at least I don't think so. My memory fails me here, but whatever it was, we had fun. 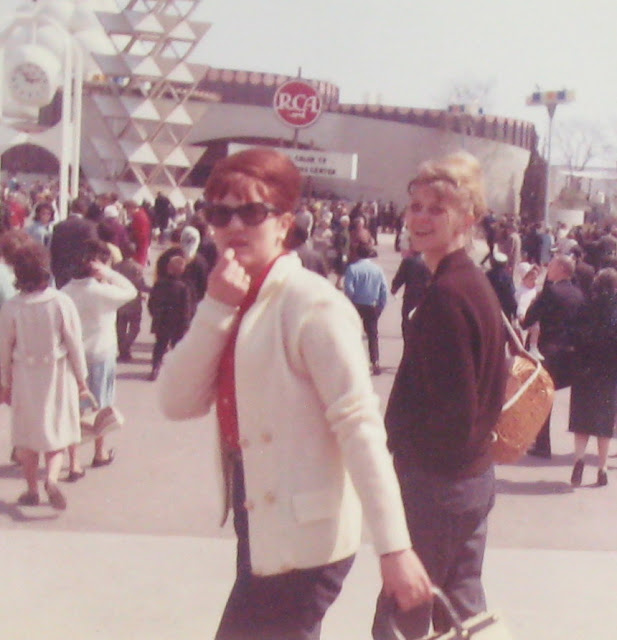 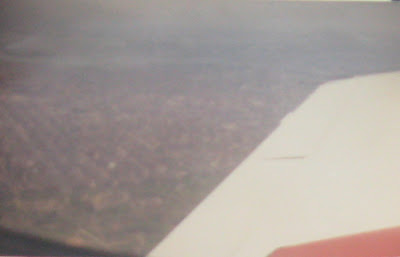 Some friends of Christina's offered to fly my dad to Kennedy Airport when it was time for him to return to Stockholm. 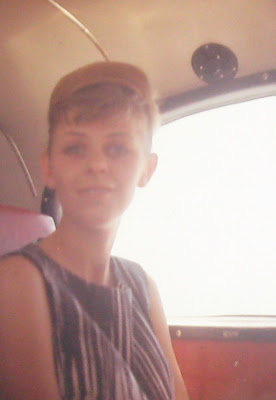 Well, you know I don't scare easily ~ but I am afraid of heights. I learned my lesson here: A person scared of heights and extremely uncomfortable up high, should never, ever, ever, ever fly in a small single engine plane. Particularly not in NYC airspace and landing at Kennedy. And once I safely landed, and said goodbye to dad, I had to jump in again and fly all the way back! Phew! In the picture above, I think I'm trying to look like this doesn't bother me at all. I don't think I fooled anyone.

My dad passed away in 1971 and in 1978 my mother came to visit me in Los Angeles, much thanks to Arne and Doris, her friends I wrote about in my Q for Quakes post. Here are some pictures from her visit: 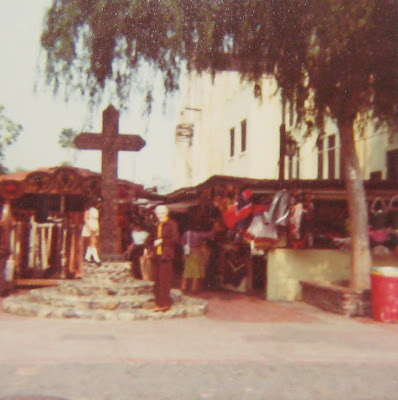 My mother fell in love with Olvera Street, the oldest part of Los Angeles. The city was founded not too far from this place in 1781. While there, mom and I ate Mexican food, shopped for trinkets, and had a great time. She made me take her back there a couple of times during her visit. My mother loved Paris, and was a bit more French than Swedish at times. I know she would have loved to go to Mexico. 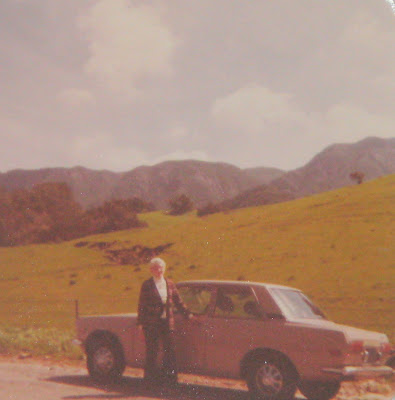 Instead, I took her in my little Datsun to the Santa Ynez valley where we spent a few days. 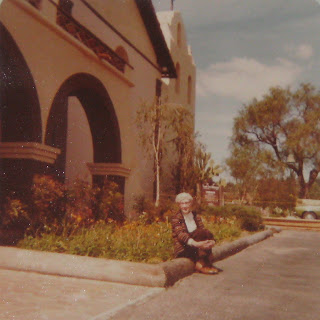 It was Palm Sunday when we visited Mission Santa Inez and palm fronds were everywhere. 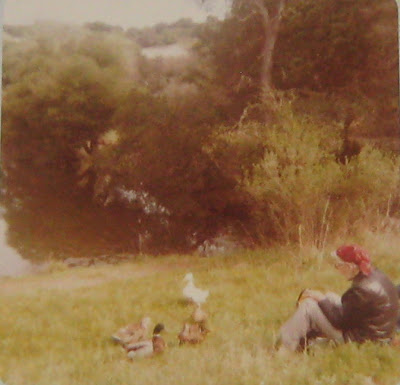 Everyone loved my mom, these ducks included. We went to this lake, Lake Cachuma, several times during our stay in the valley and it seemed like the ducks knew her, they would come running so fast. I remember she fell for that white one. Such sweet memories for me. 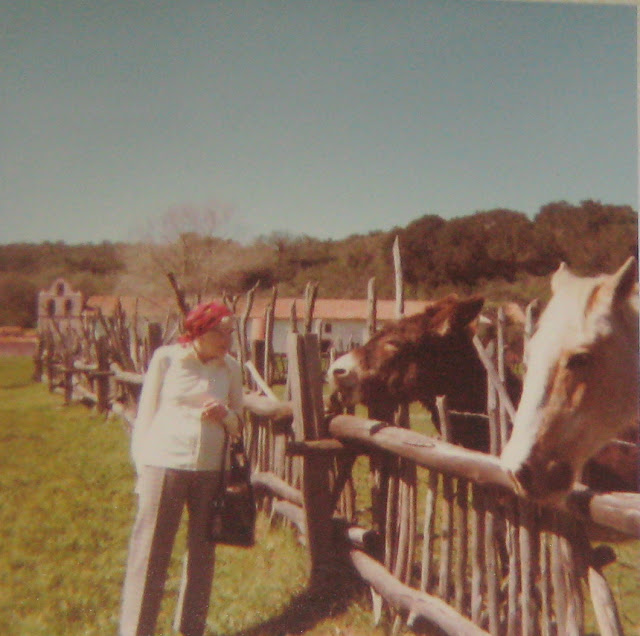 We also went to one of my favorite places, Mission La Purisima, where my mom got acquainted with a donkey. 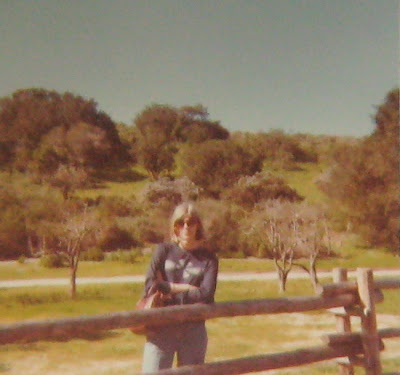 One reason I like this place so much is the nature around the mission. This is where I saw my first road runner, fell in love with donkeys, and so on. I visited here often when I was younger. Mom and I also saw Mission Santa Barbara and spent a few days in that beautiful city. 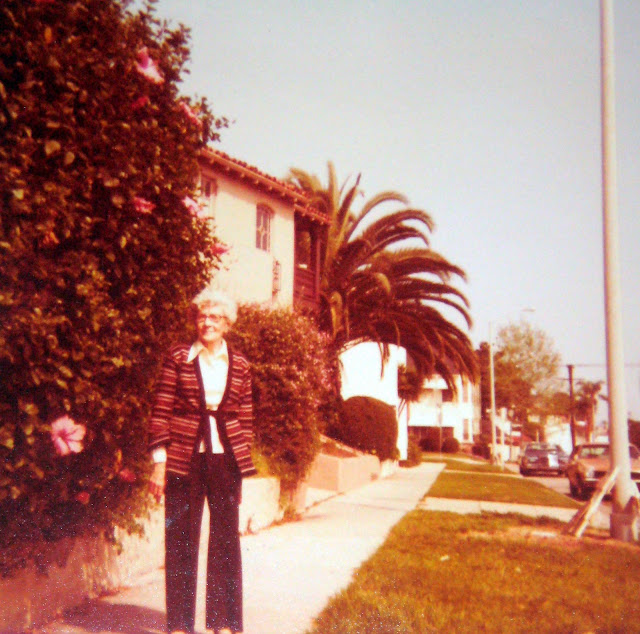 Here is my mom on the street where I lived, outside the house that my husband would get the following year, the house where we would live for many years of our married life.

Writing this part about my mom's visit has made me sad for the first time looking back over the past 50 years. While on the one hand I'm so grateful to have had a good mother, a mother who was a wonderful person and my best friend, on the other, this made me miss her so much. She is with me in my heart though..........