My thoughts go out to the people of Texas and the small town of West. While I continue to keep the people of Boston, who suffered so much, in my thoughts, I hope that the FBI have the right guys and that they will be captured soon. Then I heard about flooding in Illinois and other states around there, and tornadoes in the south; since my next posts, Q and R, are about disasters that I have lived through during my 50 Years in America, I feel tired and sad.

So this is what I will do: I'm posting my Q post about Quakes, since they are natural disasters, not something some crazy person or two created. But I will scrap my post about the 1992 Los Angeles Riots. I can always post it some other time. I will find something else for the letter R.


Arne and Doris, two old Swedes, friends of my mother's, were visiting us in Pasadena when the Sierra Madre earthquake hit. It was very close, the house was shaking, Doris was shrieking, and Arne came out of the bathroom, yelling, "I'm sorry, I'm sorry, I didn't mean for this to happen!" As it turns out, at just the moment the quake hit, Arne had inserted his electric shaver in the bathroom socket. So the poor man thought he had caused the the whole thing. 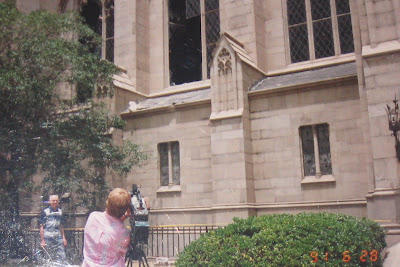 Arne gets on camera while 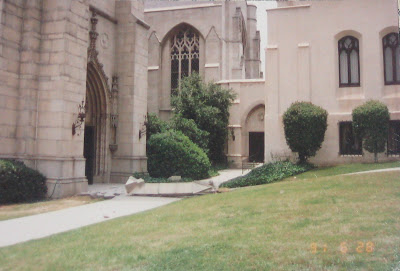 checking out earthquake damage to a Pasadena church 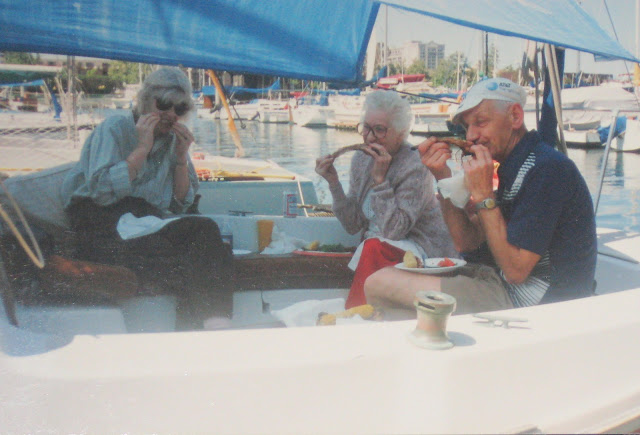 
Of course, an earthquake is no laughing matter, as we found out in the early morning hours of January 17, 1994. I fell on to the floor as I woke up, the house was shaking violently -- so violently I couldn't stand, my husband and I crawled toward each other and held on. 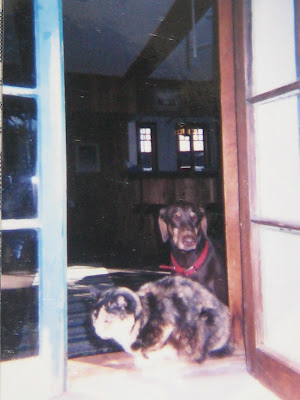 Samantha, the cat and Sundance, the Dobie

After the shaking stopped, we took Sundance, our dog, and Samantha, the only cat we could find, and went outside where we met some neighbors. We all sat in our van for a while, watching the disaster unfold on its tiny TV.

Later that day, a frantic search for our other cat, Sindbad, ensued. We walked up and down the streets, calling his name, looking up in trees, and down into crawlspaces, calling, calling -- no cat. A day or so later he appeared, calm as anything. I guess he figured the worst was over. 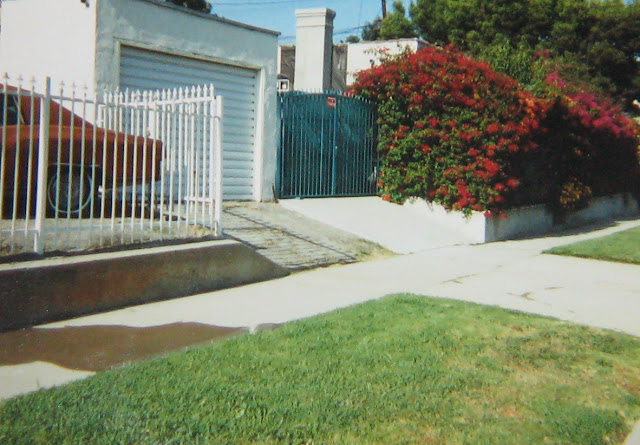 Our chimney stands tall after my husband rebuilt it.

A big chunk of the 10 freeway collapsed on a major street near us. It was shocking to see the power of this 6.7 earthquake in our neighborhood, even though the epicenter was many miles away. Our neighborhood was old, so walls and chimneys came down, there were bricks and glass everywhere. Our brick chimney was badly damaged and we later got FEMA money to fix it. 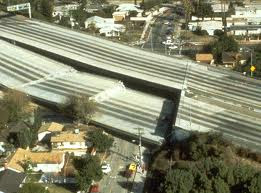 This may or may not be a picture of the collapse of the 10 Fwy, but it looked like this.

Several people lost their lives, aftershocks went on for days, and the damage to freeways, bridges, and buildings all across the area was immense. It happened at 4:30 in the morning, so few people were on the freeways. Had it happened during rush hour, the toll in life would have been horrendous.

As an asides: Our little town here in the mountains was almost completely wiped out in 1952 when it was hit by a 7.2 earthquake, one of the largest in California history.